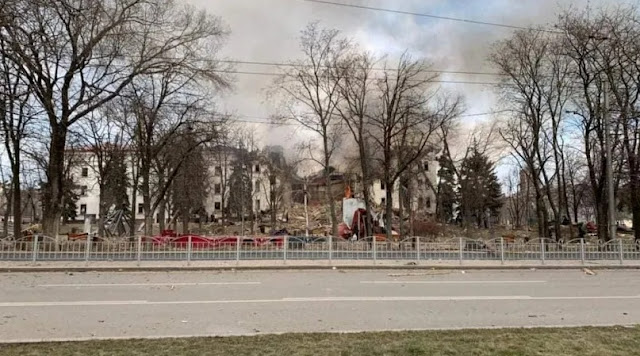 According to the authorities, 6,500 vehicles have driven out of Mariupol in the past two days. Significantly more people are said to have sought protection in the bombed theater.

Several evacuation attempts from embattled Mariupol failed before around 20,000 people were able to leave the city two days ago. According to the mayor of the southern Ukrainian port city, numerous private cars have now been allowed out of the city.

A total of around 6,500 vehicles have been able to leave Mariupol in the past two days, Vadim Bojchenko said at night via the Telegram messenger service. However, there was no ceasefire. People drove out of the city under fire. Previously, civilians had tried in vain to leave the city in several buses.

Volodymyr Zelenskyy said in a video speech that the humanitarian corridors in the country were not working on Wednesday. The President of Ukraine also said that the Russian army had not stopped shelling. The Ukrainian side is ready to evacuate, but cannot expose people to shelling in the street. Residents of Mariupol who, despite everything, managed to get to the city of Berdyansk, more than 70 kilometers to the west, are being taken on to Zaporizhia.

More than a thousand people seeking protection in the theater

According to Zelenskyy, more than 6,000 residents of Mariupol, including 2,000 children, have been transported within 24 hours. But they were also shot at further along the way in the Zaporizhia region. The information could not be independently verified. The governments in Kyiv and Moscow repeatedly blame each other for failed evacuation attempts and ceasefires that were not observed.

Meanwhile, the Mariupol City Council reported that there were more than a thousand people seeking protection in the  theater that had been bombed by the Russian army, according to new official information. "More than a thousand people found shelter in the theater before the Russian army attacked it," the city council wrote in the Messenger service Telegram. It was unclear how many of the people were injured or died.

Rocket hits block of flats in

Kiev According to Ukrainian sources, at least one person was killed and three others injured by debris from a rocket launched by anti-aircraft defense systems in Kiev. A 16-story residential building in the Ukrainian capital was hit by the remains of a rocket that was launched early in the morning, the civil protection agency said. About 30 people have been evacuated from the house so far. A fire has been extinguished. According to rescue workers, the salvage work is underway.

State will rebuild all destroyed houses

The Ukrainian government has promised all citizens to rebuild their houses and apartments destroyed in the war with Russia. Reconstruction programs are already in the works, said President Volodymyr Zelenskyy in a video message published overnight . Whatever the damage, Zelenskyy said he was confident in the country's ability to quickly restore everything.

Yesterday had the agreed humanitarian corridorsdoes not work, Zelenskyj continued. The Russian troops would not have stopped the shelling. The Ukrainian side is ready to evacuate, but cannot expose people to shelling on the street. The governments in Kyiv and Moscow repeatedly blame each other for failed evacuation attempts and ceasefires that were not observed.

About the negotiations with Russiasaid Selenskyj, they kept running. His priorities are clear: "An end to the war, security guarantees, sovereignty and the restoration of territorial integrity." He again called on the West to enforce a no-fly zone and a new sanctions package against Russia, as the Russian economy was still able to keep its war machine running. He also again called for air defense systems, aircraft, deadly weapons and ammunition for the Ukrainian armed forces.

Russia wants to buy time and is planning a new offensive

An adviser to the Ukrainian President Volodymyr Zelenskyj has warned against hopes for an early peace solution in the war with Russia. If the Russian leadership now says that it is interested in a peaceful solution, this is a deceptive maneuver, said Alexander Rodnyansky on the ARD program maischberger. the week. Chancellor Olaf Scholz had previously said that the federal government would do everything possible to give the negotiations between Ukraine and Russia a chance.

Russia's goal is to buy time and to stir up hope among the people of Europe that there can be peace, Rodnyansky said. At this time, Russia wantedrecruit new troops and then start an offensive again . "It's a typical deception, very well thought out." The Russian government knows that many people in Germany also hope for peace. "This regime only understands strength," stressed Zelenskyy's adviser.

"Of course, all of us in Ukraine believe that we can win this war," Rodnyansky said. The only question is how long it will take - and "how many people will die before we win it". Further support is needed.

Rodnyansky reiterated that Ukraine "ideally" wants a no-fly zone. NATO has rejected this several times. If that doesn't happen, an "intermediate solution" between such a zone and doing nothing is needed. Ukraine must get "very advanced anti-aircraft weapons" such as the Patriot anti-aircraft missile system or ballistic missiles. It is in the interests of all Europeans to end this conflict as quickly as possible.