The approximate number of deceased has been given by eyewitnesses, refugees under the theater at the time of the bombing. "Sadly, we start this day with bad news." The Mariupol City Council has confirmed this Friday, through its Telegram channel, the worst omen: according to eyewitnesses, some 300 people died in the Dramatic Theater, bombed by Russia on March 16.

"The Dramatic Theater in the heart of Mariupol has always been the city's business card. A meeting place, dates, a point of reference. 'Where are you? I'm at the Theater'", reads the statement from the authorities of the city in southern Ukraine, subjected to a brutal siege for weeks. "There is no Theater anymore. In its place is a new point of pain for the people of Mariupol, the ruins of what was the last refuge of hundreds of innocent people."

The colossal bombardment of the building occurred despite a large inscription on the ground, visible from the air, indicating that there were children inside. "The occupant knew where he was going. He knew what the consequences could be, and yet the bombs fell on a place that had become a refuge for hundreds of Mariupol residents, "the council denounces. "There can be no explanation for this inhuman cruelty. There will never be forgiveness for those who brought destruction, pain and suffering to our home."

"We can restore the buildings, but we will never recover friends, neighbors, family and loved ones," said the statement, which pays tribute to the "innocent victims" of a "crazy war" waged by "the terrorist state of Russia." Poland's Deputy Foreign Minister warns of the West's "passiveness" and "naivety" in the Ukraine war.

Poland's Deputy Foreign Minister Szymon Szynkowski vel Sek has warned the West against a "policy of fear" towards Russia when dealing with the Ukraine war. It was necessary to prevent the war from escalating , said the foreign policy expert on Deutschlandfunk. But the West must not be passive, naive or hesitant.

He still considers the "NATO peacekeeping mission" in Ukraine proposed by Poland's Deputy Prime Minister Jaroslaw Kaczynski to be one of several options. Szynkowski vel Sek also renewed calls for tougher sanctions against Russia. In the current phase of the conflict, more support for Ukraine is also crucial - humanitarian and also with weapons. 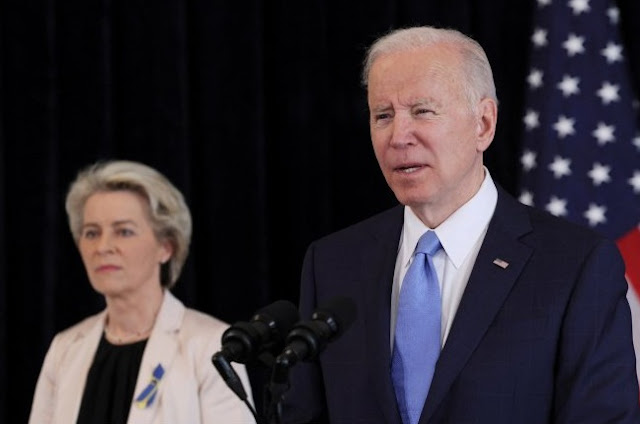 US President to deliver speech in Warsaw

After attending the summit in Brussels, US President Joe Biden is traveling to Poland today. There he will give a speech on Saturday in Warsaw. Biden's appearance at the Warsaw Royal Castle is planned for the late afternoon, a spokesman for the US Embassy in Warsaw told the dpa news agency. Today, Biden first wants to find out more about the humanitarian operation to help refugees from Ukraine in the south-eastern Polish city of Rzeszów, which is about 90 kilometers from the border. He will also meet US soldiers stationed in Poland, after which he will travel to Warsaw for talks with the Polish leadership.

US and EU agree joint task force on energy security

US President Joe Biden and European Commission President Ursula von der Leyen announced in Brussels a joint task force to reduce Europe's dependence on Russian fossil fuels and strengthen European energy security. Not only is it the right decision morally, but it will also put us in a better position strategically.

The USA, in cooperation with other countries, wanted to ensure that at least 15 billion cubic meters of additional liquefied natural gas were exported to Europe this year. The scope is to be increased further in the future.