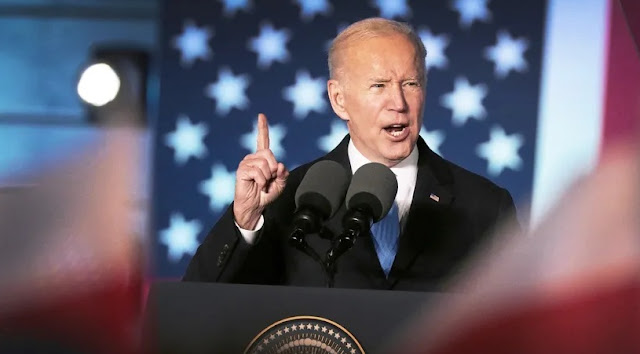 "For God's sake, this man cannot remain in power," said the US President in Warsaw. In view of the Ukraine war, the West must remain united.

In view of the war against Ukraine, US President Joe Biden has reaffirmed the value of democracy and at the same time questioned whether Russian President Vladimir Putin would remain in power.

With the Russian war of aggression, Putin made a strategic mistake, said Biden in a speech at the end of his two-day visit to Poland. "A dictator who wants to rebuild an empire can never quench the people's love for freedom." Putin will never achieve victory in Ukraine.

"For God's sake, this man cannot remain in power," Biden said in Warsaw. He did not explicitly mention Russia's president by name. After the speech, a senior White House official tried to correct: "The message from the President was that Putin should not be allowed to have power over his neighbors or the region. He was not talking about Putin's power in Russia or an overthrow of the government," said the representative.

Biden encouraged the West to have "stamina" in the fight for freedom and democracy. "That is the task of our time, the task of this generation," he said. One must remain united: "today, tomorrow, the day after tomorrow and in the coming years and decades".

It will not be easy, said the US President: "There will also be costs - but that is a price we must pay, because the darkness that fuels autocracy cannot compete with the flame of freedom that is everywhere the soul of the free man is enlightened." Biden reiterated that the US stands with Ukraine. "We stand by you," he assured the Ukrainians.

"Not an inch on NATO territory"

Biden warned Russia against a further advance  of the Russian army: The country should "not even think about penetrating an inch into NATO territory". He again referred to the "sacred duty" to provide military assistance within the NATO alliance. Russia has already "strangled democracy" and will continue to do so.

Nevertheless, the Russian population "is not our enemy," said Biden. He then addressed the Russians and said that the Russian attacks on civilians in Ukraine, which had forced millions to flee, were not the behavior of a great nation.

Biden spoke in the Warsaw Royal Castle, which is considered a symbol of the Polish capital, which was once largely destroyed in World War II and later rebuilt. During his visit he also met people who fled Ukraine and are now in Poland.

The Russian government has criticized the US President's statements. According to Kremlin spokesman Dmitry Peskov, it is not the US President who decides on leadership in Russia. "Biden does not decide that, the president of Russia is elected by the Russian people," said Peskov, according to the Ria Novosti agency.