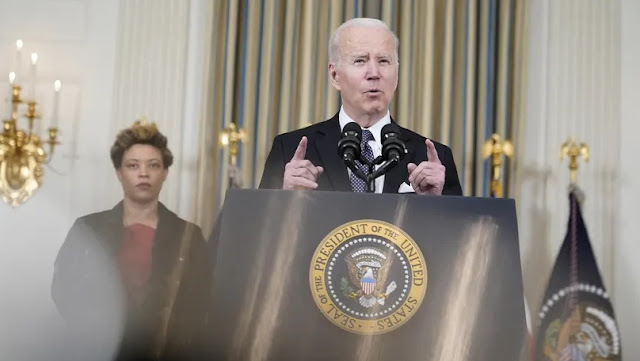 Rapidly rising prices and growing crime put the US President under pressure. With his household, he fights against ending up as a "lame duck" in the fall.

Barely back from his trip to Europe, where he shocked America's allies by calling for Vladimir Putin to be ousted, US President Joe Biden turned his full attention to domestic politics. On Monday he presented his household budget for 2023. Biden's plan calls for $5.8 trillion in spending, just below last year's proposal.

Most of the money is earmarked and intended, for example, to finance state pension insurance. Biden only has $1.6 trillion in funds to fund his political agenda. Above all, he wants to increase spending on internal and external security and social spending.

Although it is only Biden's second budget, it is probably the last chance for the president to get at least parts of his political agenda off the ground. As things stand at present, the Democrats are likely to lose the majority in both chambers in the congressional elections in the fall.

The President's budget has virtually no chance of being passed by Congress in this form. Rather, it serves as a basis for discussion in the negotiations with the House of Representatives and the Senate, which ultimately have to pass the budget bill.

The White House's main purpose of the budget proposal is to make the government's priorities clear to voters. For example, Biden wants to increase defense spending, which has always been the highest single item in the budget in recent years, by another 9.8 percent to $773 billion. This is intended to signal that Biden's government wants to strengthen external security because of the Russian attack on Ukraine and increasing tensions with China.

With a view to the forthcoming congressional elections, however, it is primarily domestic political issues that the President wants to address with his budget. Biden wants to make it clear that he has heard Americans' biggest concerns. She is driven by the rise in prices and crime. Inflation rose 7.9 percent in February, the highest since January 1982. And gasoline prices rose 38 percent over the same period. This not only affects the many commuters in the country, which only has a functioning public transport network in a few urban centers. Higher fuel prices are also reflected in higher food prices. And while the shortage of staff is driving down wages, especially in retail, gastronomy, transport and slaughterhouses has not increased as much as in the past two decades, the salaries of workers in the middle and upper range are stagnating. They feel inflation primarily as a loss of real income.Accordingly, consumer sentiment fell to a ten-year low. This in turn jeopardizes the recovery of the US economy.

It is difficult for the government to counteract this with concrete measures. Biden is at the mercy of Republican attacks, who blame his billion-euro aid packages from last year for the price increases. At the same time, Biden was unable to implement his most ambitious package, the Build Back Better Plan : his government had promised to relieve families in particular by investing in social infrastructure such as care and childcare. But Biden failed because of resistance from his own party – especially from Joe Manchin, the Senator from West Virginia.

You won't find the Build Back Better Plan in Biden's current budget. Only one item is reserved for measures to make health care and childcare cheaper. The White House does not give any concrete ideas on this.

At the same time, the United States is experiencing an increase in crime. Long dismissed as a "media-made issue" by many representatives of the left wing of the Democrats, the statistics can no longer be denied. Last year, the number of homicides increased by 44 percent compared to 2019. This was true not only in metropolitan cities like New York, but also in smaller cities like St. Petersburg, Florida, where the number of murders more than doubled. But shoplifting is also more common than it has been since the 1990s. Criminal gangs arrange to loot shopping malls on social media. They in turn sell the stolen goods over the Internet.

The crime rise is a political hazard for Biden and the Democrats. After the murder of black man George Floyd by a white police officer in the summer of 2020, the left wing of the party called for radical reform of the judiciary and police. Activists summed up their demands as "defund the police," meaning that the police should be deprived of their funds. Republicans are now accusing Biden of taking action against the police instead of criminals, although Biden has repeatedly distanced himself from activist demands. Now the president is using his budget to show his support for law enforcement. Among other things, he wants to provide 30 billion dollars for municipalities that can use it to strengthen their police forces.

Support for Biden is falling

Biden is proposing a “billionaire tax”, probably also to reconcile the left wing of the party. Higher taxes for the wealthy and companies should compensate for the additional expenditure in his budget. But tax hikes are poison in US elections, so it's doubtful that congressmen and senators from his party, whose seats are already shaking, will warm to the idea. Especially since the President has been in a polling low for months. His approval rating is 40 percent, with more than 70 percent saying the country is going in the wrong direction.

Past presidents have been able to unite the country behind them in times of war. Biden can't do that. The 79-year-old has certainly made enough mistakes of his own, but he can do little to change the fundamental problem of his party. During the election campaign, the conservative Democrats and the left wing had agreed on him as the candidate and the lowest common denominator. No sooner had Biden defeated Donald Trump and moved into the White House than this alliance fell apart. The dispute between the two wings is paralyzing the president's policies.

Republicans have it easier. The main thing for them in the upcoming elections is to position themselves as closely as possible to Donald Trump – either in order to copy him or to be recommended to the voters by him.