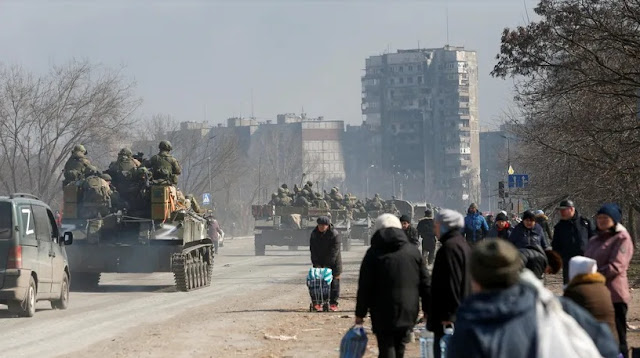 The final declaration of the EU summit states that the Russian aggression is a flagrant violation of international law. Those responsible would be held accountable.

The European Union accuses Russia of committing war crimes in Ukraine. A statement from the EU summit in Brussels early this morning said Russia was attacking civilians, targeting hospitals, schools and shelters, among other things. "These war crimes must stop immediately."

The states also wrote in the statement that Russia's aggression against Ukraine flagrantly violates international law and has resulted in massive loss of life and injuries to civilians. Those responsible and their accomplices would be held accountable in accordance with international law.

The EU states also said that coordinated political, financial, material and humanitarian support would continue to be provided to Ukraine. In addition, one is ready to quickly decide on further coordinated strong sanctions against Russia and Belarus. Any attempt to circumvent the sanctions that have already been decided or to help Russia in any other way must be stopped.

In its declaration at the Versailles summit two weeks ago, the EU had refrained from using the term war crimes. However, there had already been talk of "indiscriminate attacks on the civilian population and civilian objects".

Most recently, the US government had officially accused Russian troops in Ukraine of war crimes for the first time. "Our assessment is based on a careful review of available information from public and intelligence sources," US Secretary of State Antony Blinken said. US President Joe Biden occasionally attended the EU summit as a guest.

War crimes are violations of international law that can be brought before the International Criminal Court. War crimes include the targeted killing and starvation of civilians, the obstruction of humanitarian aid, and the use of nuclear or chemical weapons.