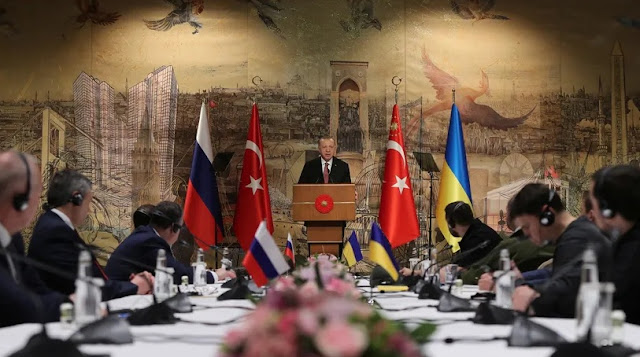 For the first time in two weeks, the representatives of Russia and Ukraine met in person for negotiations. The meeting will take place in Istanbul with Turkish mediation. Turkish President Recep Tayyip Erdoğan called on the negotiators to "put an end to this tragedy".

"As members of the delegations, you have taken on a historic responsibility. The whole world is waiting for the good news that will come from you," Erdoğan said. Progress in the talks could pave the way for a meeting between the presidents of both countries. Negotiations are expected to last until Wednesday.

Before the talks, Ukrainian President Volodymyr Zelenskyy said his country was ready for a neutral status, as requested by Russia. A compromise is also possible on the Donbass, the disputed region in the east of the country. But only a face-to-face meeting between him and Russian President Vladimir Putin could end the war, Zelensky said.

Ahead of the talks, Ukrainian Foreign Minister Dmytro Kuleba said: "If we see that the mood has changed and they are ready for serious, substantive talks and balanced agreements, then things will move forward." If Russia repeats its "propaganda," Kuleba said the talks would collapse again. 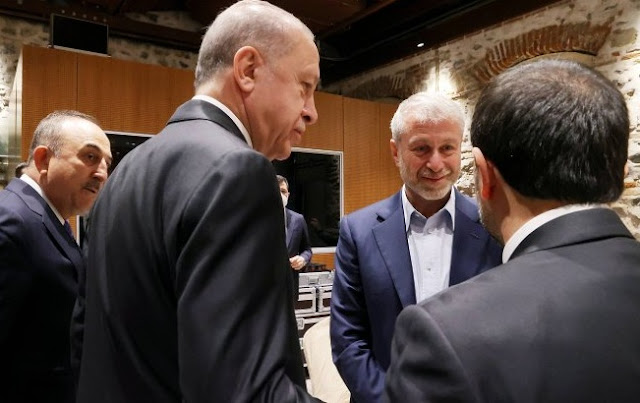 Abramovich at talks in Istanbul

The delegations from Ukraine and Russia have already met three times in the border area of ​​Belarus. After that, the talks were held in video conferences. The Russian oligarch Roman Abramovich is also personally present at the talks in Istanbul. This is reported by the Eastern European news portal Nexta. Photos from the Reuters news agency show him at the side of the Turkish president. Abramovich is to act as a mediator.

Abramovich is said to have traveled back and forth between Ukraine and Russia several times in recent weeks. President Zelenskyy said on Sunday that his government had received offers of support from Russian businessmen, including Abramovich. The Wall Street Journal reported that Zelenskyy had asked US President Joe Biden to exempt the oligarch known as the owner of English football club Chelsea from sanctions because he could play an important role as a broker.

As a result, there were media reports that Abramovich and Ukrainian negotiators suffered from alleged symptoms of poisoning after mediation talks in Kyiv. However, officials from the US government and Ukraine have expressed doubts about these reports.

In view of the threat to Ukraine's nuclear power plants from the war, the International Atomic Energy Agency (IAEA) is now supporting the country with additional equipment. IAEA Director Rafael Grossi traveled to Ukraine to discuss appropriate steps with the responsible authorities, the IAEA announced today. The intention is to send experts and material.

Rafael Grossi, Director of the IAEA

The IAEA has prepared detailed safety assistance plans for Ukraine's nuclear sites, which include 15 nuclear power plants in four plants and the Chernobyl site, the agency said. Most recently, Grossi had repeatedly expressed his deep concern about impending safety deficiencies - also because some of the operator teams on site could not be replaced at times due to the controls by Russian commanders.

Russia resumes exporting liquefied gas across the Sea of ​​Azov

Russia has resumed exporting liquefied gas across the Sea of ​​Azov. In the port city of Temryuk, the gas tanker "Premier" flying the flag of the Comoros is to be loaded today, according to data from the port operator. The ship's destination is the Bulgarian port of Burgas. It would be the first time since the Russian invasion of Ukraine a month ago that liquefied gas has been exported from a port on the Sea of ​​Azov.

The Russian authorities had prohibited ship movements in the region. Temryuk is located east of the Crimean Peninsula on the opposite shore of the Sea of ​​Azov from the Ukrainian city of Mariupol.

While negotiations for a possible peace have started in Istanbul - from which neither side expects a breakthrough - Russia announces the continuation of its attacks. "The Russian armed forces are continuing the special military operation," Defense Ministry spokesman Igor Konashenkov said, according to the Interfax agency. Since Monday, 68 Ukrainian military facilities have been destroyed by Russian airstrikes , Konashenkov said. These included anti-aircraft missile systems, two ammunition depots and three fuel depots. Three drones were also destroyed. The information cannot be independently verified.

The Ukrainian army, on the other hand, reports that Russian troops have been pushed back near the southern Ukrainian city of Kryvyi Rih. Kryvyi Rih is the hometown of President Volodymyr Zelenskyy. The head of the city's military administration said in a video message that some Russian units had withdrawn across the border of the Dnipropetrovsk region to neighboring Kherson. However, this information cannot be independently verified.

Almost 2.35 million people have fled to Poland since the Russian attack on Ukraine. This was announced by the Polish border guard today via Twitter. Around 21,000 people from Ukraine fled to safety in the neighboring country yesterday alone. Around 364,000 people have crossed the border from Poland to Ukraine since the war began on February 24. According to earlier information from the border guard, the majority of these travelers are Ukrainian citizens who are returning to their home country. There is currently no official information on how many of the war refugees stayed in Poland and how many have already traveled on to other EU countries.

According to earlier information from the border guard, the majority of these travelers are Ukrainian citizens who are returning to their home country. There is currently no official information on how many of the war refugees stayed in Poland and how many have already traveled on to other EU countries.