Russia-Ukraine Conflict: Attacks On Kharkiv, The Role Of Belarus - An Overview 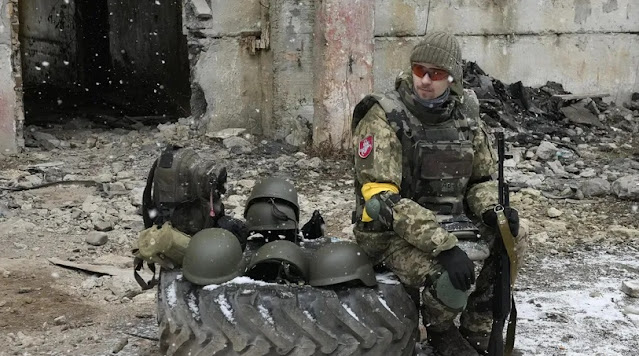 Ukraine does not believe that Belarus will support Russia in the war. The city of Kharkov is contested. US President Biden is coming to Europe.

The Ukrainian government currently considers it unlikely that Belarus will intervene alongside Russia in the war against Ukraine. The probability that Belarusian ruler Alexander Lukashenko will decide to take part in the war is "15 to 20 percent," said Ukrainian presidential adviser Oleksiy Arestovich, according to the Unian news agency.

Lukashenko is a close ally of Russian President Vladimir Putin. The Russian army uses Belarus as a staging area against Ukraine, but Belarus has so far not taken an active part in the war, despite repeated calls from Russia. The Ukrainian General Staff assumes that many Belarusian soldiers and officers will resist a deployment.

US President Biden is leaving for a trip to Europe this Wednesday. First stop is Brussels. There, NATO Secretary General Jens Stoltenberg will provide information about the Western Defense Alliance's summit meeting scheduled for Thursday. In New York, the UN General Assembly is also scheduled to discuss another resolution against Russia 's war in Ukraine this Wednesday.

Ukraine is also likely to be an important topic in the Bundestag's general debate on the 2022 budget. Chancellor Olaf Scholz will present his policy this Wednesday. On Tuesday, he again rejected an immediate ban on Russian energy imports as a means of exerting pressure. On the one hand, sanctions must have a strong effect on Russia, but on the other hand they must also be manageable for their own economy, said Scholz.

The most important news of the night & morning at a glance:

Ukrainian sources have reported further Russian attacks on the city of Kharkiv in the east of the country and on Rivne in the north-west. According to their own account, Ukrainian units fended off an attack by Russian troops. The Russian side also used Ka-52 combat helicopters, regional commander Oleg Sinegubov was quoted as saying by Ukrajinska Pravda.

According to Ukrainian sources, the situation is difficult in the city of Izyum. There is no longer any connection to the besieged city. All efforts to create an escape corridor for civilians have so far been rejected by the Russian side. The information cannot be independently verified.

Ukrainian President Volodymyr Zelenskyy has threatened all Russian fighter jet pilots that they will be held personally responsible for their attacks in Ukraine. Apparently, the pilots didn't realize what orders they were carrying out: "The killing of civilians is a crime," Zelenskyj said. According to Ukrainian sources, around 100 Russian warplanes have been shot down since the war began almost four weeks ago.

Referring to negotiations with Russia on a way out of the war, Zelenskyy said: "They are very difficult, sometimes scandalous, but we are moving forward step by step." Negotiators from Ukraine are on the job every day, Zelenskyj said in a video speech. "We will work, we will fight as much as possible. To the end. Brave and open."