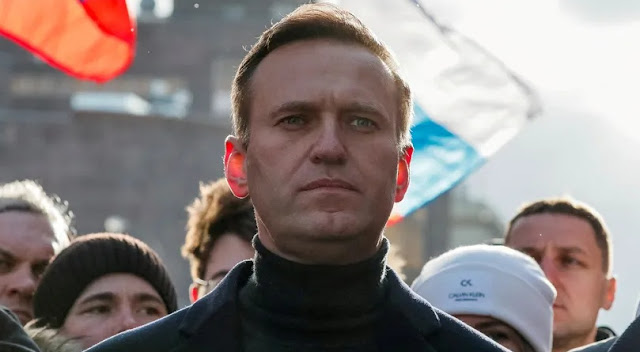 Vladimir Putin's most well-known adversary calls for peace protests while in prison. Russia must not become a "nation of frightened silent people".

Russian opposition figure Alexei Navalny has called for daily protests against Russia's war of aggression in Ukraine. "Wherever you are, in Russia, Belarus or on the other side of the world: go to the main square of your city every day of the week," Navalny tweeted. According to a spokesman, he calls for demonstrations to be held at 7 p.m. during the week and at 2 p.m. on weekends and public holidays.

"I call on everyone to take to the streets and fight for peace," Navalny tweeted. Anyone who is abroad should gather in front of the Russian embassy to protest.

"We - Russia - want to be a nation of peace," Navalny tweeted. "Unfortunately, very few would call us that at the moment." Addressing his Russian compatriots, he demanded: "Let us at least not become a nation of frightened silent people, of cowards who pretend not to notice the aggressive war against Ukraine that our obviously mad tsar has unleashed."

He cannot, does not want to and will not remain silent about "like pseudo-historical nonsense about events 100 years ago as an excuse for Russians killing Ukrainians and Ukrainians killing Russians in order to defend themselves".

Navalny is one of Vladimir Putin's best-known opponents internationally. The former lawyer and blogger has often been arrested for organizing and participating in demonstrations. In a highly controversial trial in February 2021, a Moscow court sentenced him to three and a half years in a penal camp.

A year earlier, Navalny had survived an attack with the Novichok group's nerve agent. After being treated at Berlin's Charité Clinic, Navalny returned to Moscow in January 2021, where he was arrested upon arrival. He is still active on Twitter – but it is unclear who is posting his tweets.

If there is anything to be proud of in Russia at the moment, it is the "6,824 people who were arrested because they (...) took to the streets with placards saying 'No War'," wrote Navalny.

Since the beginning of the war, people in Russia and Belarus have repeatedly taken to the streets to demonstrate against the military aggression of their presidents - despite the well-known risk of being arrested. Politicians from abroad praised the opposition Russians and Belarusians for their courage.