NATO Special Summit: "Putin Has Long Since Crossed The Red Line To Barbarism" 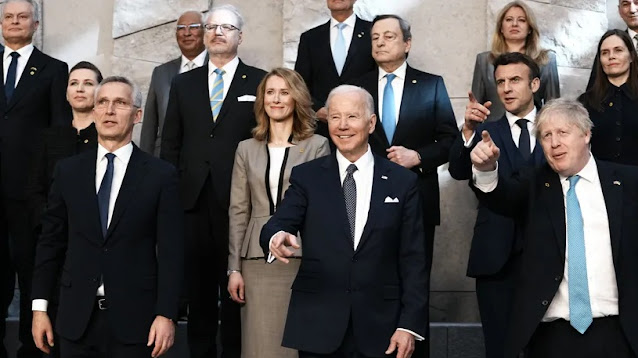 Jens Stoltenberg has confirmed that NATO will send "neither soldiers nor planes" to Ukraine. Boris Johnson accused Russian President Putin of "barbarism".

A good month after the start of the war in Ukraine, the heads of state and government of the NATO countries are discussing further action against Russia. The country had to pay a high price for its attack on Ukraine, said NATO Secretary General Jens Stoltenberg at the start of the NATO special summit in Brussels. At the same time, he reiterated that NATO would send "neither soldiers nor planes" to Ukraine.

Before the summit, Stoltenberg had consulted with US President Joe Biden, who arrived in Brussels on Wednesday evening. The White House said the issue was "Russia's baseless and unjustified invasion of Ukraine." Biden and Stoltenberg also discussed NATO's ongoing efforts "to deter and defend against any aggression."

NATO wants to reposition itself against Russia: Stoltenberg said it was about a "long-term realignment" of the military alliance on its eastern border. The soldiers already sent to reinforce the eastern part of the alliance should "stay as long as necessary," he said. In addition, four new combat units are to be sent to Bulgaria, Romania, Hungary and Slovakia.

Canadian Prime Minister Justin Trudeau said: "NATO and its partners agree to condemn Russia and support Ukraine." His British counterpart Boris Johnson called for further sanctions against Russia. "The tougher our sanctions are, the better we can help the Ukrainians and the faster it will be over," Johnson said, adding: "Putin has long since crossed the red line to barbarism."

"Nobody can feel safe anymore. Maybe Poland is next, maybe the Baltic States," said Lithuanian President Gitanas Nausėda. Estonian Prime Minister Kaja Kallas said her country did not want to be intimidated. "Putin also wants to scare us so that we don't help Ukraine, but we will not fall into this trap," she said. "We must stop the war criminal," she added.

Following the NATO meeting, the heads of state and government of the EU and the seven largest economic powers in the world (G7) will also meet. The allies want to discuss further support for Ukraine and new measures against Russia.

In the late afternoon, a two-day EU summit will also begin in Brussels, which will deal with the effects of the war in Ukraine on the European states. Biden has also been invited as a guest – it is the first time that a US President has attended a regular EU summit.

The three summits showed the seriousness of the situation because of Russia's "terrible war of aggression," tweeted Chancellor Olaf Scholz (SPD), who currently also holds the G7 presidency. "But it also shows our great unity and determination."