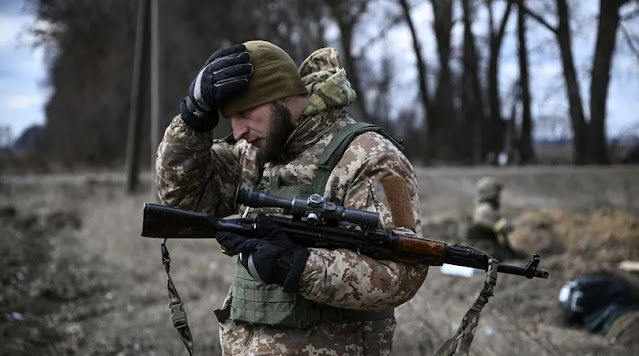 The US government has accused Russia of spreading lies about alleged weapons of mass destruction in Ukraine. Russia may be planning such an attack itself.

The US government has accused Russia and China of spreading conspiracy theories about the use of alleged US weapons of mass destruction in the Ukraine war.

"The Kremlin is deliberately misrepresenting that the United States and Ukraine are using chemical and biological weapons in Ukraine," US State Department spokesman Ned Price said on Wednesday. White House press secretary Jen Psaki criticized that "Chinese officials are repeating these conspiracy theories".

"Now that Russia has made these false claims, we should all be on the alert that Russia may be using chemical or biological weapons in Ukraine or conducting a false flag operation," Psaki wrote on Twitter.

Russia follows a clear pattern of behavior - either it wants to use weapons of mass destruction itself or fake an attack by the Ukrainians in order to construct a justification for continuing the war, Psaki wrote.

On Sunday, Russia's Foreign Ministry tweeted that Russian forces had found evidence that Kyiv was "cleaning up traces of the Pentagon-funded military-biological program in Ukraine."

The next day, the Russian Defense Ministry warned that there was a network of biological laboratories in Ukraine working on behalf of the US Defense Department. International fact checkers have since refuted the statement as a false claim. The United Nations also point to misinformation. UN spokesman Stephane Dujarric said the World Health Organization was "not aware of any activities by the Ukrainian government that conflict with its international treaty obligations, including chemical or biological weapons."

US State Department spokesman Ned Price said Wednesday that the "Russian misinformation is complete nonsense." The US did not operate any biological or chemical weapons laboratories in Ukraine and fully respected international chemical and biological weapons treaties.

Russian President Vladimir Putin, on the other hand, is known for using chemical weapons - for example in attacks on political opponents like Alexei Navalny, said government spokeswoman Psaki.

In addition, Moscow supports the Syrian ruler Bashar al-Assad, whose regime has "repeatedly used chemical weapons". There is a method for Russia to accuse the West of violations that the country is committing itself. China appears to be continuing to spread Russian propaganda, Psaki wrote.