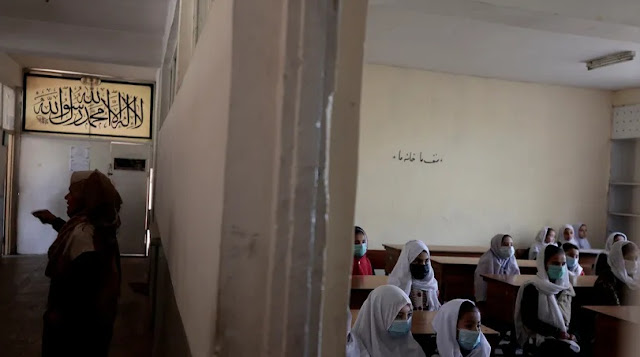 The Taliban will allow girls to take part in secondary school classes again next week. "All schools will be opened to all boys and girls," said Kabul Education Ministry spokesman Asis Ahmad Rajan.

However, girls should only be taught separately from boys and only by female teachers. In rural areas with few teaching staff, older teachers could, exceptionally, also take over the teaching of the girls.

After the Taliban took power last August, girls and women were denied access to education, as was the case during the first Taliban rule from 1996 to 2001. Mainly because of the discrimination against women and girls  and other population groups, the rulers in Kabul are not recognized by the international community.

On the same day, the UN Security Council voted by 14 votes in favor, one abstention from Russia and no votes against to extend their mandate, known as the umama. The mission to Afghanistan is mandated to work for gender equality, human rights for all Afghans, and an inclusive and representative government. When the Taliban took power, they pledged a government that would take into account all sections of the population.

Nevertheless, the cabinet consists almost exclusively of Pashtuns and no women. Women's rights director Heather Barr at Human Rights Watch warned that the reopening of schools for girls is not necessarily an indication of respect for women's rights.

The mandate is set to expire on March 17, 2023, and the text of the decision does not mention the Taliban by name. The special envoy responsible for Afghanistan, Deborah Lyons, is authorized to act "in close consultation with all relevant Afghan political actors and stakeholders".

Not only are the rights of minorities currently being restricted in Afghanistan, freedom of the press is also being restricted. The Umama Mission reported only today that there are credible reports of the arbitrary detention of reporters by Taliban intelligence. According to this, several high-ranking employees of the Tolonews broadcaster were arrested in the late afternoon.