Winter Olympics: Kamila Valiewa On The Starting List Despite The Sports Court Proceedings 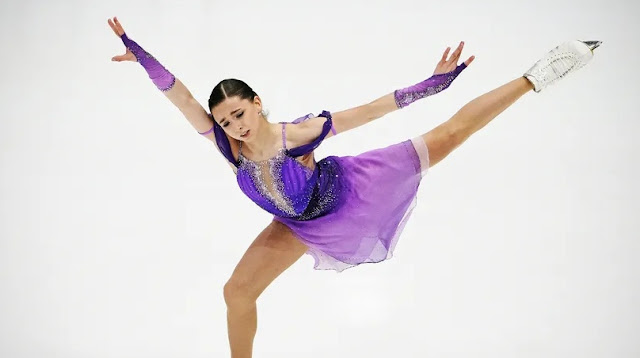 According to the start list for the Olympic short program in figure skating, the Russian Kamila Valiewa will compete. The verdict of the Sports Court on the doping test should fall beforehand.

Despite the ongoing sports court proceedings because of a positive doping test, the Russian figure skater Kamila Valiyeva is on the starting list for the Olympic short program.

The 15-year-old is scheduled to start on February 15 in 26th place out of 30, according to the published list. The judgment of the International Court of Arbitration for Sport Cas is scheduled for tomorrow Monday.

The International Olympic Committee ( IOC ) had already appealed to the Cas for a quick lifting of Valiyeva's provisional suspension. This year's European champion tested positive for the banned drug trimetazidine on December 25, 2021. On February 8, she was banned by the Rusada anti-doping agency, but the agency's disciplinary committee lifted the ban a day later. Trimetazidine, banned in sports since 2014, is used to treat angina pectoris.

Before the decision, Valiyeva had already won the gold medal in the team competition with the Russian team in Beijing . However, the award ceremony has been suspended so far. "The case in its entirety will be heard at a later date," said Mark Adams, spokesman for the International Olympic Committee. But we want to speed things up as much as possible.

Adams revealed that further possible consequences for Valiyeva and those around her would only be decided later. "The wheels of justice grind pretty slowly. We have to follow the process," Adams said. Coach Eteri Tutberidze defended Valiyeva from the verdict. "I want to say that I am absolutely sure that Kamila is innocent and clean," she said on Russian state television. There are many questions and few answers. "We really hope that justice will prevail."

Russia 's Sports Minister Oleg Matyzin was also convinced that the athlete was "absolutely innocent". According to the Interfax agency, Matyzin said that he had called Valiyeva twice himself. "There is optimism and energy in her voice."

The IOC has also called for moderation in cases of alleged threats against journalists because of their reporting on Valiyeva. Since a 15-year-old is at the center of the case in Valiyeva, there are "all sorts of points of contention," Adams pointed out. "It is unacceptable that this turns into threats and violence, if that's the case," said the IOC spokesman.

Several British reporters had previously reported that they had been massively threatened on the Internet because of the publications on the doping test and that some media representatives from Russia had also attacked them. "Even among ourselves, it's important that we observe the Olympic values ​​of respect," said Adams.

According to the IOC Olympic Director Christophe Dubi, the case should not have any major consequences for the entire Winter Olympics. "The games are the games. It's clear that when there are so many athletes and so many competitions, a variety of problems arise," he said. Despite the suspicion of doping and the legal dispute, Waliyewa initially continued to train in Beijing.