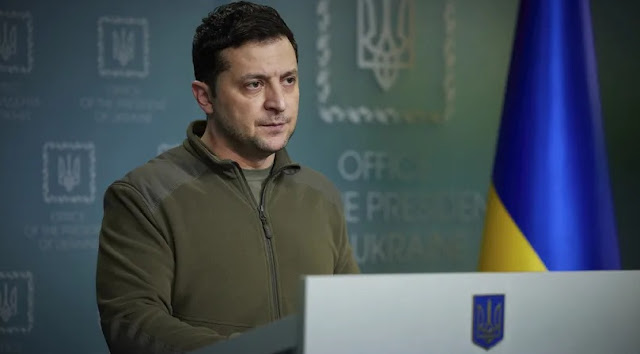 Russia can no longer be a member of the top UN body, says the Ukrainian president. He also demands that energy deals with the state be ended.

"Here is Ukraine. Here is Europe. Here is the year 2022. Evil armed with rockets, bombs and artillery must be stopped immediately. Economically destroyed. To show that humanity can defend itself," Zelenskyy said. A complete blocking of the airspace for Russian missiles, planes and helicopters must be considered.

At the peace talks, led by a Ukrainian and a Russian delegation on Monday, he said Ukraine has not yet achieved the desired result. "Russia has presented its positions, counter-arguments have been made by us to end the war." As soon as the delegation is back in Kyiv, they will analyze and decide how to proceed in the second round of negotiations.

Zelenskyy assumes that Kyiv is the main target of the Russian army. "Kyiv is an important target for the enemy. That's why the capital is under constant threat." Russia is sending saboteurs to the capital. "We will disarm them all," Zelenskyj added. Selenskyj described the shelling of the eastern Ukrainian city of Kharkiv as a war crime. "There will definitely be a tribunal for this crime. An international one. It's a violation of all conventions."

Zelenskyy demanded that Russia should be denied access to all ports, canals and airports in the world. According to Zelenskyy, which could not be independently verified, Russia has carried out 56 rocket attacks on Ukraine since the invasion began five days ago. 113 cruise missiles were fired.

"That's how it is, the 'brotherly friendship'," said Zelenskyj. "Such a state should not receive hundreds of billions for the export of energy resources. Whoever buys Russian goods now pays money to kill people," Zelenskyy continued.