USA: "I Had No Right To Overturn The Election" 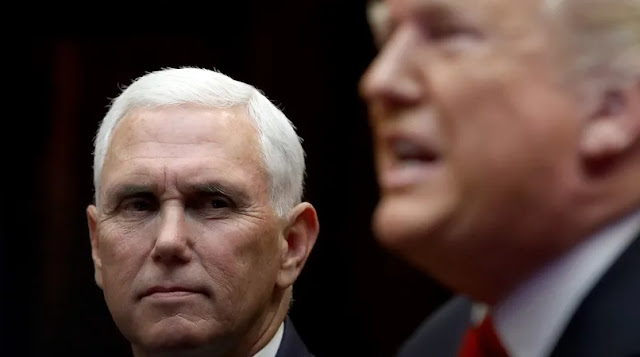 Former US Vice President Mike Pence has publicly attacked Donald Trump for the first time. He described his statements on the storming of the Capitol as "un-American".

The idea that one person could elect the President of the United States is "un-American". The Bible-believing Republican was loyal to Trump for four years, but has distanced himself since the Capitol attack. He has long been said to have ambitions for a presidential candidacy.

Pence presided over the January 6, 2021 session of Congress where he formally endorsed the results of the presidential election. "Under the Constitution, I had no right to change the outcome of our election," Pence said Friday at an event hosted by the Federalist Society, an association of very conservative lawyers.

At the time, he had refused to give in to Trump's pressure to prevent the election results from being confirmed in Congress. Trump wanted to overturn Joe Biden's election victory at the last minute, but Pence relied on his oath to protect the constitution.

The words of the 62-year-old are actually taken for granted, but in this clarity they are remarkable. Trump immediately counterattacked in the evening. Pence has become a kind of automatic assembly line to make Biden president as quickly as possible, Trump said through his spokeswoman Liz Harrington.

"Well, the position of vice president is not an automatic assembly line when there are obvious signs of voter fraud or irregularities." To this day, Trump refuses to acknowledge his electoral defeat. He claims to have been cheated out of victory. He has no evidence. Dozens of lawsuits have failed in court.

Pence and Trump could compete for the nomination in 2024

Radical Trump supporters stormed the congressional seat in Washington on January 6 to sabotage confirmation of Biden's election victory. Five people died as a result. Trump had previously incited his supporters with allegations of fraud. They had also searched the Capitol for Pence, whom they called a traitor and threatened to hang him for failing to prevent Biden from winning the election.

Trump continues to insist that Pence could have done something about the outcome of the election. On Tuesday, he said the commission of inquiry into the storming of the Capitol should look into why Pence didn't return the votes that needed to be confirmed. And on Sunday Trump claimed Pence could have overturned the election result.

Unlike Trump, Pence and his wife Karen were guests at Biden's swearing-in ceremony on January 20, 2021. Referring to Trump and January 6, he has said in the past that he doesn't know "if we'll ever agree with a view to the day". However, he avoided the public confrontation and later praised Trump.

In Washington, it has long been suspected that Pence himself may have ambitions to run as a Republican candidate in the 2024 presidential election. Should Trump also declare his candidacy, the two would compete against each other as competitors in the internal party competition.

Trump is still extremely powerful in the party. Anyone who speaks out against him usually pays for it with his career. The most recent example is Republican Representatives Liz Cheney and Adam Kinzinger, who were formally reprimanded at a Republican convention on Friday for serving on the investigative committee into the Capitol attack.