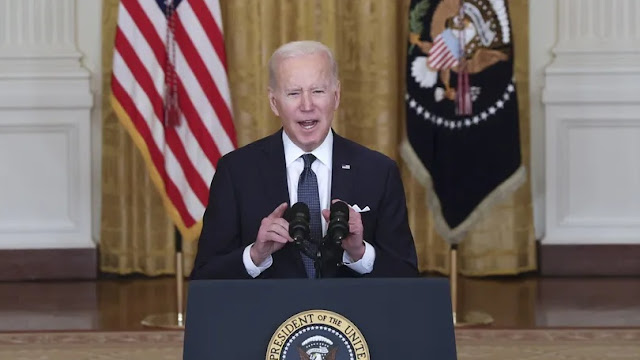 According to the US President, Russia's head of state Vladimir Putin has decided to attack Ukraine "in the coming days". Kiev is also in danger.

According to US President Joe Biden , he expects a Russian attack on Ukraine in the "coming days". "I am convinced that he made the decision," Biden said of Russian President Vladimir Putin at the White House on Friday. "We have reason to believe so." But Russia still has the choice between a "catastrophic and senseless war" and "diplomacy".

"We have reasons to believe that the Russian military is planning and planning to attack Ukraine in the coming week, in the coming days," Biden said. He added: "We believe they will attack the Ukrainian capital of Kiev, a city of 2.8 million innocent people."

It is the US President's clearest statement to date on Putin's alleged plans for an attack. For weeks, the USA has been warning of an imminent invasion by Russian forces in the neighboring country. In view of the Russian military build-up, a provocation by Ukraine would "contradict common sense", according to US President Joe Biden. Moscow is trying to portray Ukraine as an aggressor and is using misinformation such as an allegedly planned offensive in the eastern Donbass region, Biden said in the White House on Friday.

"There is no evidence to back up these claims and it goes against common sense to think that Ukrainians would choose this moment, with more than 150,000 troops on the border, to escalate a years-long conflict," Biden said. The Ukrainian military has so far acted with good judgment and also "restraint". "They refuse the Russians to drag them into a war," Biden said.

It is a fact that Russian troops have "surrounded" Ukraine, Biden stressed. Moscow has positioned soldiers near the border in eastern Ukraine, as well as in northern Belarus and in the south in the Black Sea, Biden said.

A few hours earlier, Russian media had reported that an oil pipeline had exploded in areas of eastern Ukraine controlled by pro-Russian fighters. Images from the city of Luhansk circulated by Russian media showed a fireball lighting up the evening sky. The Ria Novosti news agency reported that the Druzhba pipeline in Luhansk exploded. There was also an explosion in the city of Luhansk, the Russian state agency TASS reported, citing local authorities.

In the past few days, grenade fire has repeatedly erupted between Ukrainian government troops and Russian -backed rebels in the Donetsk region, according to both sides. Projectiles hit a kindergarten, among other things. Both sides accused each other of violating the current ceasefire. The information cannot be independently verified.

The increasing number of incidents in eastern Ukraine are contributing to growing fears in the west of a possible Russian invasion of the neighboring country. In addition, pro-Russian separatists announced on Friday that they would now bring civilians from the areas of eastern Ukraine they control to Russia. They described this as a precautionary measure in anticipation of a possible Ukrainian attack.

In Europe, the separatists' announcement was viewed critically. Federal Foreign Minister Annalena Baerbock and her French colleague Yves Le Drian warned in a joint statement that Russia could be looking for a pretext for an invasion of Ukraine: "We fear that staged incidents could be misused as a pretext for a possible military escalation." it in the Declaration of Germany and France.

In the evening, French President Emmanuel Macron, US President Joe Biden, Chancellor Olaf Scholz and other top politicians discussed the situation again. After the meeting, the French presidential office said that France and its allies were united in their efforts to prevent Russia from invading Ukraine. Such an invasion would change the geopolitical situation in Europe.

US President Biden announced that US Secretary of State Antony Blinken will meet with the Russian chief diplomat Sergei Lavrov in Europe next Thursday. If Russia takes "military action" before this meeting, "it will be clear that it has slammed the door on diplomacy," Biden said. "It will then have decided on war, and it will have to pay a high price for it."

According to a media report, the German security authorities are preparing specifically for the possible effects of a war on Germany. "The situation is very tense," said Federal Interior Minister Nancy Faeser to the newspapers of the Funke media group. "That's why we prepare for every scenario and are very vigilant." This applies to the protection of facilities in Germany, to the defense against cyber attacks and " possible escape movements in the direction of our neighboring countries ".

The Funke-Blatter quote security circles with the statement: "Should there be a (Russian) invasion, migration movements cannot be ruled out, initially within Ukraine, but also especially in neighboring countries." However, there are currently no indications of increased migration movements towards Germany.

According to the FDP interior expert Stephan Thomae, Germany would "perhaps have to take in a six-figure number of people" if there was a war in Ukraine. This could be managed because fewer people from the Middle East or Afghanistan are currently coming to Germany, said the parliamentary manager of the FDP parliamentary group on the TV station Welt.

A massive Russian troop deployment, which according to Western figures is now around 150,000 soldiers , has fueled fears of a Russian invasion of Ukraine for weeks. Moscow denies any plans of attack and says it feels threatened by NATO.