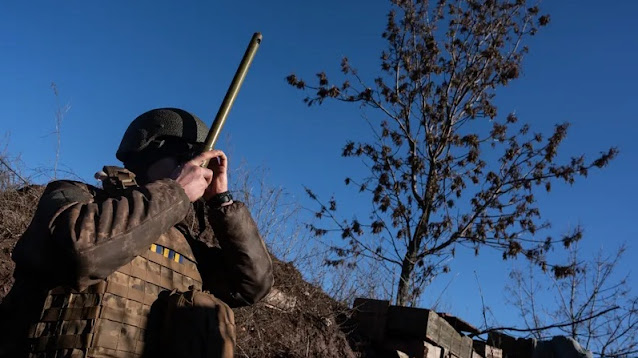 The Ukrainian ambassador in Berlin has requested 12,000 anti-tank missiles. Secret services assume a Russian attack could be imminent.

Before Chancellor Olaf Scholz's visit to Kiev, the Ukrainian ambassador in Berlin renewed the demand for heavy weapons from Germany. At Bild-TV, Andrij Melnyk demanded the immediate delivery of 12,000 anti-tank missiles in order to be able to fend off a possible Russian ground offensive against Ukraine. "The situation is dramatic," he said. "What we have to be prepared for today is the worst possible scenario."

The German's refuses to supply deadly weapons to Ukraine. However, it is considering making armaments available below this threshold.

On a February 3 wish list from the Ukrainian embassy are a number of armaments that are clearly not lethal weapons. These include electronic tracking systems, mine clearance equipment, protective suits, digital radios, radar stations and night vision devices. Anti-tank missiles are not on this wish list.

German Chancellor Olaf Scholz travels to Kiev on Monday to meet President Volodymyr Zelenskyy. He will be received by Russian President Vladimir Putin in Moscow on Tuesday.

Baerbock warns of consequences for Russia

Federal Foreign Minister Annalena Baerbock (Greens) sees Europe in an "absolutely precarious situation" given the Ukraine conflict with Russia. So far, however, there are "no signs that the military conflict has already been decided," said Baerbock in the ARD daily topics . The talks with Russia are about "talking together about how we can ensure security together".

It is also important to talk about further disarmament steps and more transparency on both sides, said Baerbock. "Military conflicts are the worst thing for all of us in the heart of Europe." She underlined that the West is ready to speak at any time. "We are trying through all channels to keep Russia at the negotiating table." Should there be a military attack by Russia on Ukraine, there will be tough economic sanctions, said Baerbock. "We do not shy away from the consequences, Russia must be aware of that." An attack will have "insanely big consequences and consequences for Russia".

According to Western information, Moscow has massed more than 100,000 soldiers on the border with Ukraine in recent months. Russia denies any plans to attack and says it feels threatened by NATO.

According to information from informed circles, American and European secret services have new clues as to the possible timing of a Russian attack. A planned Ukrainian military exercise on Tuesday could give Moscow the opportunity for a so-called "false flag operation," two sources told the AP news agency.

The United States has long assumed that Russia is planning such an operation. A pretense for an invasion of Ukraine is to be provided with a fake attack on the country's own territory. In early February, Pentagon spokesman John Kirby said the Kremlin had planned, among other things, to produce a propaganda video featuring explosions, images of what appeared to be corpses and grieving villagers to be played by actors.

Great Britain is also warning of a possibly imminent Russian invasion of Ukraine. The crisis has reached a critical point, says a government spokesman. "All the information we have indicates that Russia could be planning an invasion of Ukraine at any moment." But there is still a window of opportunity for de-escalation and diplomacy. Nevertheless, Britain is working with its allies on a package of military and economic aid for Ukraine. Details would be announced in the coming days.

Canada has temporarily withdrawn its military personnel stationed in Ukraine. The Ministry of Defense announced that it had been taken to another European country, without giving any details. The reason is the concern that Russia is preparing to invade Ukraine. Since 2015, Canada has stationed around 200 soldiers in western Ukraine for training purposes.