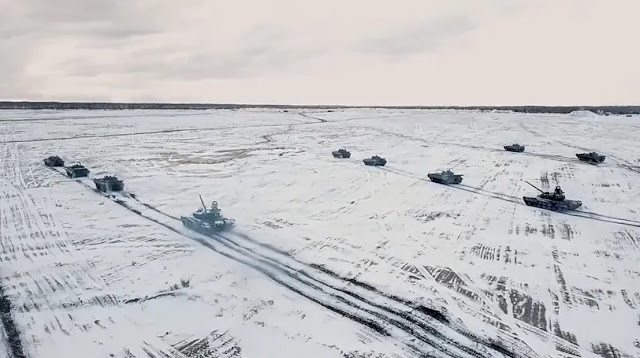 The US government warns that Russia wants to fake an attack on its own territory in order to invade Ukraine. A fake video should cause outrage.

A staged attack by the Ukrainian armed forces or secret services on "Russian sovereign territory or Russian-speaking people" is "an option" that the Russian government is planning. That should then be used as justification for a Russian reaction.

"We believe that Russia would produce a very graphic propaganda video, with dead bodies and actors portraying mourners," Kirby said. Explosions and destroyed places should also be shown; the equipment should look as if it had been delivered to Ukraine from the West. "We have seen such activities by the Russians in the past," said the ministry spokesman. He did not provide any information on what evidence there is or what stage the alleged plan is at.

The Washington Post reported that the plan was already well advanced. Not only would victims be faked in eastern Ukraine, but also in Russia. Russia then wants to trigger outrage. The US government had already warned in December of such a fake attack on Russia, for which the Kremlin wanted to hold Ukraine responsible. Russia has always denied such allegations in the past.

A senior source in President Joe Biden's administration said Thursday intelligence findings suggested Turkish Bayraktar drones were used to capture the video. The Ukrainian military used these drones from the NATO member against pro-Russian separatists in the Donbass region.

The source said the government was making the information public to dissuade President Vladimir Putin from invading the neighboring country. One is concerned that such a video would give Putin the necessary reason for an invasion.

Zelenskyi received his Turkish colleague Recep Tayyip Erdoğan in Kiev on Thursday , who proposed a Ukraine-Russia summit in Turkey to resolve the crisis. Erdoğan had already offered to mediate between Ukraine and Russia in the past; Turkey maintains good relations with both countries. So far, however, the Russian government has reacted cautiously to the initiative. In the Ukraine conflict, Turkey angered Russia with deliveries of combat drones to Ukraine, among other things.

Kremlin spokesman Dmitry Peskov accused the United States of further escalating the situation by announcing that it would send thousands of soldiers to Eastern Europe. Russia's concerns about a possible eastward expansion of NATO and the stationing of US troops in the region are "completely justified," said Peskov in Moscow.

The Pentagon announced on Wednesday that it would send 1,700 soldiers to Poland and 300 more to Germany. 1,000 US soldiers currently stationed in Bavaria will be sent to Romania. "The current situation makes it necessary for us to strengthen deterrence and defense on NATO's eastern flank," Pentagon spokesman John Kirby said.

On the other hand, NATO accused Russia of currently relocating around 30,000 soldiers to its partner country Belarus, north of Ukraine. The combat troops would also include combat aircraft, Iskander missiles that can be equipped with nuclear weapons, S-400 air defense systems and special units of the GRU military intelligence service, said NATO Secretary General Jens Stoltenberg in Brussels.

In a week, Russia and Belarus want to start joint maneuvers in the south of the ex-Soviet republic. Belarusian ruler Alexander Lukashenko said at a meeting with Russia's Defense Minister Sergei Shoigu that the threat from the south had to be addressed. "We are forced to strengthen the border with Ukraine." Russia will help.

Shoigu had said that the total number of soldiers involved in the February 10-20 maneuver did not exceed the maximum number stipulated in the 2011 Vienna Document. That would mean fewer than 13,000 troops, 300 tanks, 500 armored vehicles and 3,500 paratroopers.

Ukraine: do not "panic".

Despite the armament and intensified rhetoric, Ukraine recently warned against falling into "panic". Defense Minister Oleksiy Resnikov said on Thursday that he currently assesses the risk of a "significant escalation" as "low". What is more to be feared is an "internal destabilization" fueled by Russia.

The United States and its Western allies have feared an impending attack for weeks, given a deployment of more than 100,000 Russian soldiers and heavy equipment on the border with Ukraine. In this case, the allies have threatened massive sanctions. Russia rejects the allegations and at the same time states that it feels threatened by NATO. Intensive diplomatic efforts to defuse the conflict have been going on for weeks.