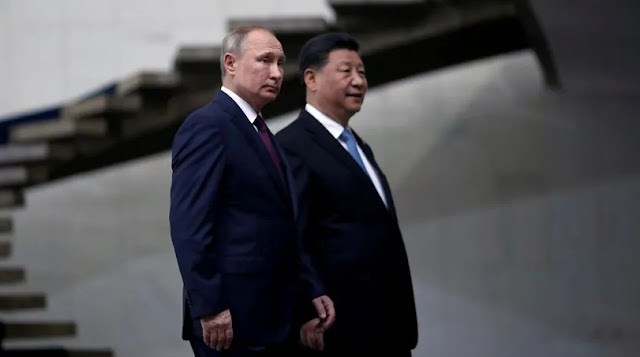 China's head of state has just declared its friendship with Russia. But with Putin's open aggression against Ukraine, he threatens to become his accomplice.

The autocrats in Moscow and Beijing are in complete agreement on one point: They don't like the geopolitical dominance of the USA. And they also despise liberal states, whose political and economic openness they use to their advantage wherever possible - Xi Jinping and Vladimir Putin share their preference for repressive rule. Ideologically, if you can call it that, the similarities are exhausted.

In this respect, Xi's alliance with Putin in Beijing in early February is an alliance of convenience , a community of interests and hardly a community of values. Xi had said China would oppose NATO expansion in Eastern Europe, which must have pleased Putin. In return, Russia wants to sell natural gas to China via a new pipeline from a gas field that has so far supplied Europe. Ukraine was not mentioned in the joint statement.

But now Vladimir Putin is escalating: After he had surrounded Ukraine with the military for many weeks, on Monday he declared the separatist regions of Donetsk and Luhansk, which belong to Ukraine under international law, to be independent. It is now to be feared that Russian troops will officially invade there, following the lies of Moscow propaganda that Ukraine is the aggressor there. There are also fears that Russia wants to invade the entire Ukraine. For China's leadership, however, this is a problem: Putin does not recognize Ukraine's sovereignty - but China does.

In complete contrast to Russia, China maintains lively economic and political contacts with Ukraine. Since 2020 she has been a member of the global flagship initiative Belt and Road (BRI) for large projects such as ports, bridges, railway lines or energy networks. China is one of the largest trading partners of the Eastern Europeans, its large state-owned companies have invested a lot of money in the energy and construction sectors, while Ukraine is an important supplier of agricultural products, but also of cooking oil, nuclear reactors and mechanical engineering . So Vladimir Putin is putting considerable strain on the new alliance of convenience – and thereby at times exposing China's official policy.

On Saturday, China's chief diplomat Wang Yi was allowed to deliver the new line against NATO via video at the Munich Security Conference: "Western states must consider whether it will bring more security to keep pushing NATO's eastward expansion." Speaking about Russia and Ukraine, he said the parties need to return to the Minsk agreement: "Why can't all sides sit down and have detailed talks and work out a timetable on how to implement this agreement?" Unfortunately, on Tuesday, Putin immediately withdrew from the Minsk Agreement. Wang also said that the sovereignty, independence and territorial integrity of each country should be upheld. "Ukraine is no exception," said Wang - a rejection of Putin's Ukraine aggression.

All sorts of contortions are now necessary for China, because in foreign policy the principle of non-interference in other countries is repeatedly insisted on. Shortly after the founding of the People's Republic in 1949, China's legendary Prime Minister Zhou Enlai laid down the "five principles of peaceful coexistence", which are still invoked in China today. They include maintaining territorial integrity and sovereignty and not engaging in aggression or interference in other countries.

So how much can a alliance with Russia be worth today? China and Russia have not been this close since the 1950s, when the Soviet Union's Communist Party helped its counterpart build a command economy. Ideological squabbling led to the split, which only ended when China opened up. The renewed rapprochement between the two nuclear dictatorships has been particularly evident over the past decade, with Xi and Putin having met 38 times now. For China, Russia is primarily an energy supplier. China also receives support from Moscow for the development of new weapons and there have also been joint military maneuvers.

But China's economic output is incomparably greater than Russia's. China's entrepreneurs sell consumer goods and textiles to Russia, and since Putin's trouble with the West, China's large digital and telecommunications industry has also been entering the Russian market. Only: As trade and technology partners, the USA, the EU and Japan are much more important for the government in Beijing.

From a geopolitical point of view, the chaos in Ukraine unleashed by Russia would at best be that it could militarily distract the USA from the East Pacific region, whose hegemony China claims: The Americans would have to "reduce attention and resources to China in the Indo-Pacific," said Shi Yinhong, Professor of International Relations at Beijing Renmin University, the South China Morning Post from Hong Kong . On the other hand, the USA and President Joe Biden, like their predecessor Donald Trump, have identified China as a foreign policy priority and it can be assumed that this will remain the case.

Russia and China compete in the post-Soviet space

A problem for China's foreign policymakers is how far to trust autocrats like Vladimir Putin. An attack on Ukraine is an advance into the post-Soviet space, as Vladimir Putin recently did in Kazakhstan, when he flown in Russian-led troops to quell unrest there. Here, Russia's desire to exert influence in the former Soviet republics of Central Asia clashes with China's similar interests. For China, the post-Soviet states are, among other things, an important building block for its trans-Eurasian railway connections and the natural gas and oil pipelines from Central Asia.

But what the strategists in Beijing must be more acutely concerned about is not being sucked into the economic sanctions that are still to be expected by the USA and the EU against Russia. After Russia's invasion of Crimea in 2014, China provided modest aid, with major foreign state banks like China Exim Bank and China Development Bank providing loans to Russian state banks, which had been sanctioned by the West. Even today, China could help its friend in Moscow relax economic sanctions. "Should Beijing decide to support Russia, the two could seek to circumvent the US-dominated global financial system by expanding trade in Chinese yuan and using a nascent Chinese interbank payment system for cross-border funding in place of the world's dominant Swift system", writes the financial newspaper Wall Street Journal.

But it won't come to that for the time being, because China's successful digital industry in particular is dependent on high-tech products from the USA, Europe and Taiwan, as well as on global financial and payment systems. All too obvious support for Russia and especially for Putin's entourage, which is sure to be affected by sanctions, would alienate China further from the West, especially from the EU, which China's foreign ministers were again strongly courting in Munich . In addition, Putin's aggressions against Ukraine have already revealed a remarkable solidarity of the NATO states and their friends.

Vladimir Putin will certainly ask Xi Jinping to provide economic cushions against sanctions against Moscow. Xi would be in a bind and could only do so easily. With the declaration on Donetsk and Luhansk on Monday, Russia's president already completed a more or less final break with the USA and the EU. Xi Jinping's open solidarity with the Russians is becoming increasingly tricky for him. Xi might also wonder if Putin misinterpreted his anti-NATO support as carte blanche. Or if Putin just does what he wants and doesn't care about Xi. In order not to make China look too stupid, one can certainly count on one thing at this point: that Beijing and China's state media will now diligently claim that the USA and NATO are to blame for the Russia crisis.