Ukraine Conflict: According To The Pentagon, Russia Is Continuing To Arm Itself On The Ukrainian Border 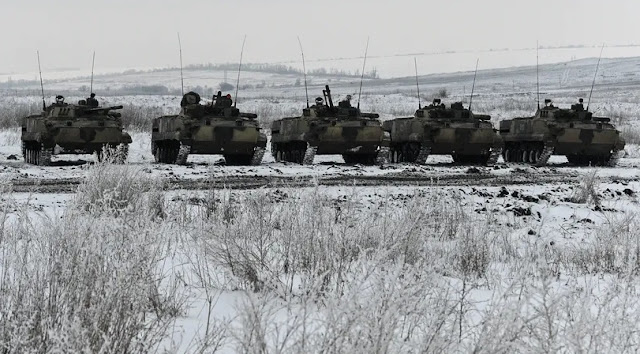 The US government reports a further reinforcement of Russian troops. Russia's ambassador to Germany emphasizes that his country does not want war.

According to US information, Russia has further strengthened its units on the borders with Ukraine and Belarus. Pentagon spokesman John Kirby said additional military capacities had been relocated within the past 24 hours.

"We are also seeing signs that more tactical battalion groups are on the way," he added. Referring to Russian President Vladimir Putin, Kirby said: "Every day he creates additional options, every day he expands his skills."

According to the Pentagon, the soldiers transferred from the US to Poland could also help evacuate US citizens from Ukraine in an emergency. Kirby said he could not rule out that these military personnel could be used to some extent in evacuation assistance on the Polish side.

However, at the moment there are no efforts by military means to get Americans out of Ukraine. "There are many ways to get out of Ukraine," Kirby said. The United States advises against traveling to the country, among other things because of the "increasing threat from Russian military actions" and has also reduced its diplomatic presence there.

On the orders of US President Joe Biden, the United States sent 1,700 soldiers from the United States to Poland and 300 more to Germany because of the Ukraine crisis. Many of them are already there, the rest should arrive in the coming days. According to the Pentagon, around 80,000 US soldiers are stationed in Europe. The broadcaster CNN reported that the US military in Poland can set up reception camps and emergency shelters near the Ukrainian border to take in US citizens in the event of a Russian invasion of Ukraine. The US government has repeatedly ruled out sending soldiers to Ukraine itself.

In the wake of reports of a massive deployment of soldiers on Russian territory near Ukraine, warnings have been given in the West of a possible invasion for weeks. The government in Moscow denies this.

Russia's ambassador to Germany stressed that his country had no interest in going to war with Ukraine. "We definitely don't want this conflict to break out," Sergei Nechayev told the editorial network Germany. "We are peaceful people and do not need war with our neighbors."

However, NATO's military-technical development of Ukraine poses a major security risk for Russia, he said. With the appropriate weapon systems, the approach time to vital Russian centers is only five to seven minutes. "It's very dangerous."

Along with Poland, the former Soviet republics of Estonia, Latvia and Lithuania are among the EU countries that border Russia. They therefore feel particularly threatened by the powerful neighboring country. The Balts advocate a hard line against the government in Moscow and reject the Nord Stream 2 gas pipeline from Russia to Germany. They are also in favor of supplying arms to Ukraine and sometimes supplying them themselves.

For example, Estonia has applied to the federal government to be allowed to supply nine artillery pieces that come from GDR stocks. Germany's consent to the transfer of these cannons with a range of 15 kilometers is contractually regulated. Germany has been examining the request for weeks. The federal government refuses to supply deadly weapons to Ukraine.

In addition to the Balten summit, there will be another important meeting on Thursday in Berlin regarding the Ukraine crisis: the conflicting parties Russia and Ukraine will be speaking directly to each other for the second time since the start of the troop deployment on the Ukrainian border.

The foreign policy advisors of the two governments are meeting with their colleagues from Germany and France, who are mediating in the conflict.