Russian Troops Remain In Belarus For The Time Being 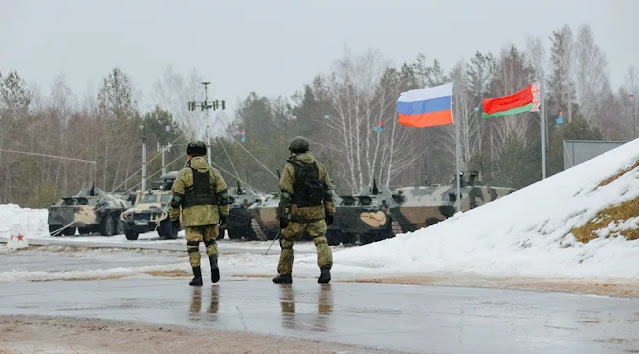 The West had counted on a withdrawal of Russian troops from Belarus. Both countries are now extending their maneuvers, citing the situation in eastern Ukraine as the reason.

Belarus and Russia are extending their joint military exercises. Therefore, the originally announced withdrawal of Russian troops from the area did not take place. This was announced by the Belarusian Defense Minister Viktor Chrenin in the messenger service Telegram.

According to the statement, Chrenin said that "in view of the increase in military activities" near the external borders of both countries and the aggravation of the situation in eastern Ukraine, it was decided to continue the "review of the Union State's reaction forces".

The government army and the separatists supported by Russia have been at odds in eastern Ukraine since 2014. In the West, there are fears that Russian President Vladimir Putin could use the fighting there as a pretext for an invasion of Ukraine, claiming that he has to protect the pro-Russian population there. Fighting is already underway in eastern Ukraine.

Explosions were heard again and again, especially in the region around Donetsk, according to news agencies. On Saturday, the separatists ordered a "general mobilization" and at the same time called on women, children and the elderly to leave the country for Russia. Belarus and Russia have been holding a major maneuver together for the past ten days. This was originally supposed to end this Sunday. It is unclear how many Russian soldiers will remain in neighboring Belarus. According to NATO, around 30,000 soldiers are currently stationed there.

Putin and the Belarusian ruler Alexander Lukashenko had decided on further joint exercises, said Chrenin. The two politicians met in Moscow on Friday and Saturday.

The Russian Presidential Office called the situation on the so-called contact line in eastern Ukraine "maximum burden". Any minor provocation could lead to irreparable consequences, the Interfax news agency quoted government spokesman Dmitry Peskov as saying. The West's constant warnings to Russia against invading Ukraine are a provocation and could have adverse consequences.

Russia had previously promised to withdraw all troops after the end of the maneuvers in Belarus. However, the West has expressed doubts about this account and further fears that Russia is preparing an invasion of Ukraine as part of the exercise in Belarus.

The military leaders in Belarus and Russia, on the other hand, repeatedly emphasize that the troop deployments are purely for training purposes, do not pose a threat to anyone and are also in accordance with international law.

Russia and the former Soviet Republic of Belarus have always maintained very close relations. Both states cooperate within the framework of the Belarusian-Russian Union, primarily in the areas of defense and economic policy.