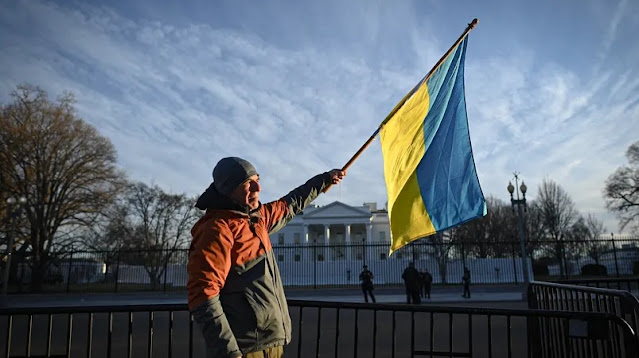 A US Department of Defense official said the US had no reason to doubt Putin's order. However, it is unclear how it will be implemented. Putin's step was "unnecessary because Russia has never been threatened by the West or by NATO and certainly not by Ukraine," said the Pentagon representative.

Putin's order also threatens to escalate the situation because "powers are set in motion" that could make the situation "very, very much more dangerous" in the event of a misjudgment. Russia has the largest nuclear armed force in the world.

British Defense Secretary Ben Wallace described Putin 's order as a "battle of rhetoric". "The main thing is that Putin mentions it to remind people and the world that he has this deterrent," Wallace told the BBC. However, there is currently no evidence that Russia's nuclear stance has changed. "We take it very, very seriously," said the minister. Nothing will be done that could cause further escalation in this area.

US Ambassador to the United Nations Linda Thomas-Greenfield also condemned Putin's move. The Russian president "is escalating this war in a way that is completely unacceptable," she told CBS.

Putin had previously put his country's nuclear forces on increased alert, citing alleged "aggressive statements" by high-ranking representatives of NATO states and "unfriendly" steps taken by the West against his country.

US Presidential spokeswoman Psaki said it was a pattern that Putin had repeatedly demonstrated in the course of the Ukraine conflict. Russia was "never threatened by NATO or Ukraine." The US would stand up to threats from Russia: "We have the capabilities to defend ourselves."

NATO wants "no war with Russia, we are not looking for confrontation"

In the face of the Russian attack on Ukraine and Russia's "threatening rhetoric", the US and Europe must now "really stand together," NATO Secretary General Stoltenberg told the British BBC. NATO "does n't want a war with Russia, we're not looking for confrontation," he stressed. However, there should be no doubt about "our ability to defend and protect our allies".

According to the Pentagon official, Putin may have taken the measure because Ukrainian forces are using Western weapons to further impede the advance of Russian troops. According to information from the US Department of Defense, the Russian troops have not yet achieved the goals they have set themselves, which is also due to logistical problems. "This is particularly acute in their advance on Kharkiv," said the official.

In response to the mobilization of Russia's nuclear forces, the EU announced it would allocate EUR 450 million to finance arms sales to Ukraine , ban Russian state media RT and Sputnik, and close its airspace to all Russian planes. EU Commission President Ursula von der Leyen said that the decision to supply arms to "an attacked country" was a "historic turning point" in EU history. Ukrainian President Zelenskyi welcomed the formation of an international " anti-war coalition" in support of Ukraine.

Defense Minister Lambrecht: "We have seen how unpredictable Putin is"

Federal Defense Minister Christine Lambrecht (SPD) expressed concern about the alerting of the Russian nuclear forces. "It has to be taken very seriously and, above all, observed by our reconnaissance team," said Lambrecht on Deutschlandfunk. "But it also has to be put into context that he hasn't progressed as quickly with his offensive, with his war, as he probably imagined." Lambrecht said:

"He had imagined it faster and now has to act and that's why these gestures. But nonetheless: We have seen how unpredictable Putin is, and that's why we have to be very vigilant now." Lambrecht announces: "We will also have to talk about it in NATO."

Lambrecht went on to say: "Putin knows what devastating effects such a decision would have for his own country, as do other leaders in Russia. That's why it's now important to keep a cool head and not continue this escalation." It is important to be prepared.