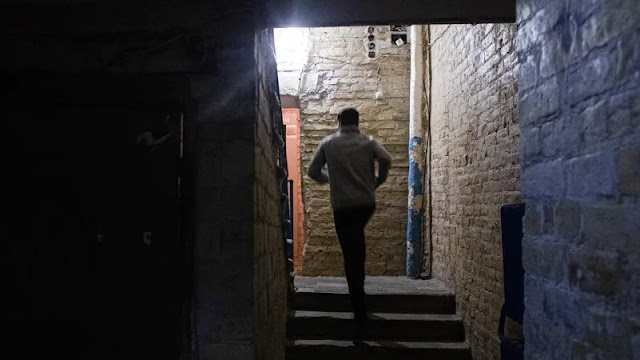 The fighting for the capital is apparently ongoing. Negotiations should start early in the morning on the border with Belarus. The most important events of the night.

The Russian offensive against the Ukrainian capital Kyiv will continue, according to the Ukrainian military. In northern Kiev, the Russian army tried to build a pontoon bridge to cross the Irpin River, the Ukrainian General Staff wrote on Facebook. Another attempt to capture the city of Irpin just before Kyiv was unsuccessful.

According to a report by the State Information Service of Ukraine, there have been several explosions in the metropolises of Kiev and Kharkiv. Before that, it had been quiet in the capital for several hours. According to the information service, a rocket is said to have hit a residential building in the Ukrainian city of Chernihiv, not far from the border with Belarus. The information could not be independently verified.

According to the media, talks about a possible peace solution between the warring parties, which were actually already planned for Sunday, should begin this Monday morning. This is reported by the Russian state agency Tass and Ukrainska Pravda. The reason for the delay in the meeting is the "logistics of the Ukrainian delegation," writes Tass, citing an anonymous source. The Russian delegation has already left Minsk and traveled to the conference venue.

The Ukrainian Presidential Office had previously announced that Kyiv had not set any conditions for the talks planned on the Ukrainian-Belarusian border in the Gomel region of Belarus. Ukrainian President Zelenskyy was skeptical: "I don't believe in the outcome of this meeting, but let's try."

Russia takes city on Azov Sea, according to Ukraine

According to the Interfax-Ukraine agency, Russian troops were advancing from the southern Ukrainian city of Cherson in the direction of Mykolaiv. Oleksiy Arestovich, an adviser to President Volodymyr Zelenskyy's office, also reported that Russian troops captured the city of Berdyansk in the south of the country. The city of more than 100,000 people, located on the Sea of ​​Azov, was taken on Sunday evening, he said. The port city of Mariupol on the Sea of ​​Azov, which is considered a key target for Russian forces, "is holding out," Arestovich said.

According to Ukrainian data, the losses of the Russian army continued to increase. According to the Ukrainian General Staff, the Russian side has lost 4,500 soldiers since the beginning of the war with Ukraine. Helicopters, tanks and other military vehicles were also destroyed. This information was initially not verifiable. Russia admitted its own casualties in the war against Ukraine, but without naming numbers.

US reports fuel and logistics bottlenecks in Russian troops

The US Department of Defense spoke of fierce resistance from the Ukrainians. "Ukrainians are putting up fierce resistance," a senior ministry official said in a briefing for journalists. "It's heroic, it's inspirational, and it's very clear for the world to see." One also observes fuel and logistics bottlenecks of the Russian troops.

"In our estimation, they did not anticipate the level of resistance they would encounter," the government official said. However, it can be assumed that the Russian armed forces would adapt and overcome the challenges. According to US estimates, Russian President Vladimir Putin only has two-thirds of the fighters deployed in Ukraine for the border invasion.

The ministry official sharply criticized Putin's announcement that he would put the nuclear power's deterrent weapons on special alert. The step is unnecessary because Russia has never been threatened by the West, NATO or Ukraine. It also represents an escalation. In the event of a miscalculation, the situation could become much more dangerous.

EU Commission chief Ursula von der Leyen supports Ukraine's admission to the European Union : "You are one of us and we want you in."

War refugees are to receive immediate protection in the EU without lengthy asylum procedures. So far, EU countries have taken in around 300,000 Ukrainians.

The EU will allocate half a billion euros to supply arms and equipment to the Ukrainian armed forces.

Hundreds of thousands of people have demonstrated in many cities against Russia's attack on Ukraine. Demonstrators have also taken to the streets in Russia against President Vladimir Putin's military action.