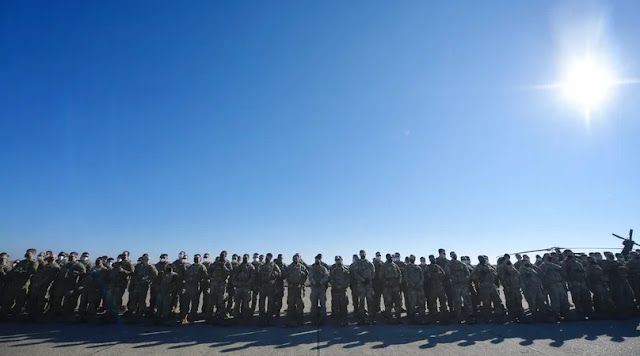 The US government is urging US citizens to leave Ukraine within 48 hours. US President Joe Biden wants to call Russia's President Vladimir Putin on Saturday.

The US thinks it is possible that Russia will invade Ukraine before the end of the Olympic Games. National Security Advisor Jake Sullivan said at a White House press conference. There is a "very clear possibility that Russia will decide to take military action."

Accordingly, Russian President Vladimir Putin has not yet decided whether he wants to order an attack. However, Russia has prepared all its armed forces for a large military operation. The threat is so serious that now is the time for all US citizens in Ukraine to leave the country within the next 24 to 48 hours.

"If you stay, you're taking the risk that there won't be any exit options," Sullivan said. If there were to be a Russian invasion, there would likely be airstrikes first and then a ground offensive. "Nobody could rely on air, rail or land connections after a military operation begins," Sullivan said. A few hours earlier, US Secretary of State Antony Blinken said the invasion could begin during the Winter Olympics in Beijing. Both referred to new intelligence information.

Russian Foreign Ministry spokeswoman Maria Zakharova spoke of hysteria in the White House. "The Anglo-Saxons need a war. At any cost," she said. "Provocations, misinformation and threats are a popular way to solve their own problems." In view of the tense situation, US President Joe Biden and Russia 's head of state Vladimir Putin want to talk on the phone this Saturday. According to the Russian government, Washington asked for the talks. The US government, in turn, says the talks stem from a proposal by Russia.

A US government official said on Friday that Moscow had proposed a phone call on Monday, but eventually accepted a counter-proposal of a call this Saturday. Biden is spending the weekend at Camp David, the country home of the US presidents in the US state of Maryland. French President Emmanuel Macron also wants to speak to Putin. Chancellor Olaf Scholz will meet the Russian President in Moscow on Tuesday.

US President Biden had phoned a number of European heads of state and government on Friday , including Chancellor Scholz and the heads of government of France, Great Britain, Canada, Italy and Poland, NATO Secretary General Jens Stoltenberg and top EU politicians. As the White House announced, the consultation lasted almost 80 minutes.

According to information from the dpa news agency from German government circles, the allies emphasized their determination to react to a possible invasion with quick and severe sanctions. The situation is assessed by the participants from the EU and NATO as "very, very serious". "All diplomatic efforts are aimed at persuading Moscow to de-escalate," wrote government spokesman Steffen Hebestreit on Twitter. "It is important to prevent a war in Europe."

Other countries are recommending their citizens to leave

Biden previously warned in an interview with NBC that the situation could quickly get out of control. If Russia did invade, American troops would not evacuate US citizens in the country . Biden said he wanted to prevent a direct military confrontation between the United States and Russia. "It's a world war if Americans and Russians start shooting at each other," Biden said.

Security Advisor Sullivan again underlined the willingness of the USA to find a diplomatic solution to the conflict. The talk offers to Russia are still valid. Should the Kremlin decide to attack Ukraine, Sullivan announced dramatic consequences for Russia: "In the long run, an invasion will decrease, not increase, Russian influence."  Russia must reckon with a transatlantic alliance that is more united than ever, with increasing dependence on China and "massive pressure on its economy, which would wipe out its industrial base." In the event of such aggression, Russia would face a "wave of condemnation from all over the world."

Numerous other countries have advised their citizens who are in Ukraine to leave the country. These include Latvia, Estonia, Canada, the Netherlands and Japan. Australia also joined on Saturday. "Our advice is clear: the situation is dangerous. You should try to leave Ukraine," said Australian Prime Minister Scott Morrison. The German Foreign Office has not issued a similar recommendation, but warns against unnecessary travel to Ukraine.

Israel announced plans to fly family members of its diplomats out of Ukraine. The US announced weeks ago that it was preparing to evacuate diplomats. As journalists reporting from the Ukrainian capital Kiev reported on Twitter , the EU has started to withdraw its staff. Only urgently needed personnel remain in the country.

In November 2021, Russia began gathering troops on the border with Ukraine as part of military exercises. In the past few weeks, however, they have increased their strength beyond the scope of the regular exercises. According to US information, there are more than 100,000 soldiers near the border, and another 30,000, including heavy war equipment, are said to be in neighboring Belarus.

Ukraine and Western allies fear they are preparing for an invasion. The Kremlin has always denied this. However, President Putin threatened "technical military measures" if NATO did not meet his demands. These include the guarantee that Ukraine will not be admitted to the military alliance and the withdrawal of NATO soldiers from eastern member countries.