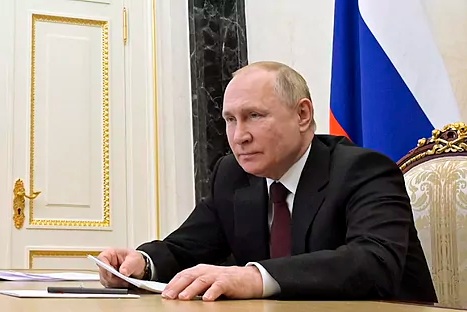 The Russian president manages with this decision to leave the West out of place and Kiev before the abyss of another possible outbreak of the conflict.

As the West feared and was unable to avoid, Russia took another territory from Ukraine on Monday night. Vladimir Putin decided to break the deck and recognize the breakaway territories of Donetsk and Lugansk. He thus puts an end to a peace process in Ukraine that, although it had notably managed to contain the bloodletting of deaths, was not offering Moscow the desired returns.

The Russian leader gave instructions to deploy the Russian army in these rebel territories of Ukraine. He ordered the Russian Defense Ministry to send forces "on a mission of peace"to these areas of Donbas and also asked his Foreign Minister to establish diplomatic relations with the Donetsk and Lugansk People's Republics. The measures took effect immediately, the Kremlin said.

German Chancellor Olaf Scholz agreed with his French colleague, Emmanuel Macron, and with US leader Joe Biden that the decision would not go unanswered, according to the Foreign Ministry. "Biden strongly condemned Russian President Putin's decision to recognize the 'independence' of Ukraine's so-called DNR and LNR regions," in a call with Ukrainian President Volodimr Zelenskiy, the White House said.

The Minsk agreements, signed in 2015 when Ukraine was cornered by separatist fighters and Russian troops, granted greater power to the revolted territories, where Russia has more influence. What was signed then has not been fulfilled and Russia has kicked the board that leaves the West out of place and Kiev before the abyss of another possible outbreak of the conflict.

In a bitter late-night address to the nation, Putin complained to the cameras about post-Soviet Ukraine's behavior toward Russia. He accused the Ukrainians of having stolen Russian gas in the past and using the energy to blackmail Moscow, accusing Ukraine's successive leaders of wanting "all the good things from Russia without any obligation".

During a long talk in an office with multiple screens, two Russian flags and a swarm of analog telephones, Putin revisited one of his recurring traumas, stating that the collapse of the USSR was a "robbery" for Russia. "Ukraine's security can threaten Russia's security," Putin denounced in a jump to the present when gauging Kiev's chances of accessing NATO: "It is a matter of time, and the risks for Russia will emerge decisively, lightning strikes and pre-emptive strikes. Putin calculates that tomahawk missiles "could reach Moscow in 35 minutes, and hypersonic missiles in three minutes." "They deceived us saying that they were not going to expand NATO ," Putin denounced.

The move may disrupt diplomatic efforts. Russian Foreign Minister Sergei Lavrov said in the morning that he planned to meet his US counterpart Antony Blinken in Geneva on Thursday and mentioned that there had been some progress in talks with the West on security. But Blinken warned that any meeting would be canceled if Russia invaded. The tension is maximum in that gray area where Russians, Ukrainians and separatists touch.

The recognition of these republics supposes a 'de facto' annexation of the armed separatists of Donetsk and Lugansk, whose survival is tied to Russia. The question now is what other spring Putin can look for to continue conditioning Kiev's policy, which for better or worse loses those territories definitively. In reality, Moscow has been sucking these two failed states for years: the ruble circulates, and Russia already offers passports to residents of the two regions. Moscow claims there are now 800,000 Russian citizens there. If they are attacked, they will defend them with weapons.

DRAMA IN THE SECURITY COUNCIL

Hours before signing the decree along with the separatist leaders, Putin had prepared the Russians for a decision that further separates Russia from the West and its neighbor Ukraine. In a televised meeting of his Security Council, which is normally held behind closed doors, Putin returned to his usual demands on central Europe, insisting that it is not enough for the West to say that Ukraine was not ready to join NATO at this time moment. One by one, his main collaborators paraded in front of Putin: heads of the intelligence services, ministers and other positions linked to the security services.

As in a choreography, each one put on the table the fears, arguments, theories and claims that Putin and his entourage have been festering during the last weeks of tension with the West. All pushed the president to take this step without turning back. And when one of them hesitated, he was reprimanded by Putin himself on camera. It was the director of Russia's foreign intelligence service (SVR), Sergei Naryshkin, who was the only one who stumbled over his role when he said that Russia should give the partners the opportunity to talk and then, if necessary, recognize their independence.

Putin interrupted him and asked him to speak clearly, demanding his full support. Naryshkin, confused and stammering, corrected himself by going too far: he supported the annexation of the territories to Russia. Putin had to scold him again: Prime Minister Mikhail Mishustin spoke with his usual plain sincerity: "We have been preparing for the possible adoption of the Luhansk People's Republic and the Donetsk People's Republic for many months." Nikolai Patrushev, the secretary of the Security Council, stirred fears against the West "their goal is the destruction of Russia" and claimed that "it is not the people of Ukraine who organized this. They are being frightened and forced to take this path." The Russian government has been trying for weeks to separate the EU from the negotiation and Patrushev corroborated: "The only country with which we need to have negotiations is the United States."

Defense Minister Sergei Shoigu went further by saying that Ukraine, which renounced nuclear weapons after independence from the Soviet Union, had a "nuclear potential" greater than Iran or North Korea, in clear reference to the recent requests from the Ukrainian president to review its nuclear status. "This means the end of the Minsk agreements," concluded Maria Avdeeva, director of the European Expert Association.

Both the EU and the US have announced sanctions. Biden will "soon" sign an executive order with economic sanctions for the self-proclaimed breakaway republics of Donetsk and Luhansk.