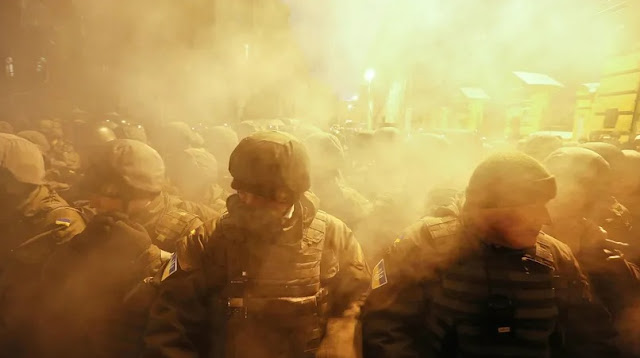 Civilians are allowed to carry weapons, reservists are called up, all citizens should leave Russia: Ukraine is preparing for a Russian invasion.

The Security Council of Ukraine has announced a state of emergency for the whole country because of the possible Russian invasion. That initially refers to the next 30 days, said Secretary of the Security Council, Oleksiy Danilov. Among other things, curfews are possible. Increased police presence and random checks of people and cars would also be permitted.

Parliament's approval is still pending, but is considered a formality. A special state of emergency has been in force in the eastern Ukrainian separatist regions of Donetsk and Luhansk since 2014.

In addition, Ukraine has started to call up reservists. According to a statement by the armed forces, reservists aged between 18 and 60 are affected. The maximum term of service is one year. President Volodymyr Zelenskyj had previously ordered the convocation by decree, but ruled out general mobilization. The Ukrainian parliament also passed a first-reading amendment to the law that would allow private individuals to  carry firearms and act in self-defense. The final second reading could follow soon.

The government in Kiev called on its citizens to leave Russia immediately . The Ukrainian Foreign Ministry also warned against traveling to the neighboring country. Earlier estimates put the number of Ukrainians living in Russia, either permanently or temporarily, at more than three million. "Ignoring this recommendation will make it significantly more difficult to ensure adequate protection for Ukrainian citizens in Russia," the government said. The current situation is leading to massive restrictions on consular support.

In addition to the embassy in Moscow, Ukraine operates four consulates in St. Petersburg, Rostov-on-Don, Yekaterinburg and Novosibirsk. Foreign Minister Dmytro Kuleba recently advised President Volodymyr Zelenskyy to sever diplomatic relations. The Permanent Representative of Ukraine has already been recalled to Kiev for consultations. The two neighboring countries have not had an ambassador in the neighboring country for years.

Russian President Vladimir Putin recognized the independence of the separatist areas in eastern Ukraine on Monday and announced that Russian soldiers would be sent there. In response, the US and EU enacted sweeping financial sanctions against Russia and the separatists. Germany stopped the controversial Nord Stream 2 gas pipeline project. The West continues to fear a major attack on Ukraine.

Russia has announced tough countermeasures in response to US-imposed sanctions. "There should be no doubt that there will be a tough response to the sanctions that will not necessarily be symmetrical, but will be well calculated and painful for the American side," the Russian Foreign Ministry said.

The United States has no other means than "blackmail, intimidation and threats". The country is trying to impose its world order on everyone. However, Russia is not being influenced by the pressure of sanctions, the statement said. It has already been demonstrated in the past that the consequences of foreign sanctions can be effectively cushioned.

Israel has expressed its support for Ukraine's territorial integrity and sovereignty . This emerges from a statement by the Israeli Ministry of Foreign Affairs. The government is concerned about the “serious escalation” in eastern Ukraine. The country has close ties with Russia, but also with Ukraine. However, Russia was not mentioned in the communication.

Israel "hopes for a diplomatic solution leading to reassurance and stands ready to assist if asked," the statement said. The State Department also expressed concern for the well- being of Israeli citizens and the Jewish community in Ukraine.

Zelenskyy: "The future of European security will be decided here in Ukraine"

Ukrainian President Volodymyr Zelenskyy welcomed the decisions on sanctions against Russia. It was right to put Nord Stream 2 on hold. "This pipeline is a weapon aimed at Ukraine and Europe," Zelenskyi said at a joint press conference with Poland's President Andrzej Duda and Lithuania's President Gitanas Nauseda.

He was grateful for the support of the two countries that wanted to supply arms and ammunition. "The future of European security will be decided here in Ukraine." Duda warned of an escalation of the conflict. It's a fine line."If war breaks out, we don't know where it will lead."

Both Duda and Nauseda called for Ukraine to be granted EU candidate status. Not least because of the current security situation, Ukraine deserves this, and Lithuania and Poland support it.