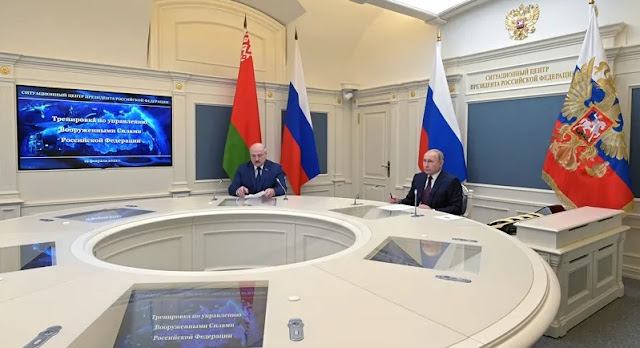 In the south and east of the country, the Kremlin has tested the use of nuclear-capable missiles. Ukraine does not want to be provoked by this.

In the midst of the Ukraine conflict, Russia has started a large-scale military exercise with nuclear-capable missiles, according to Russian news agencies. According to the Kremlin, the aim of the maneuver is to test the reliability of strategic nuclear weapons.

One exercise was held at a test site in the Astrakhan region in the south of the country, another on the Kamchatka Peninsula in the east. In addition, warships of the Black Sea Fleet and the Northern Fleet were involved.

The exercise was followed from the Kremlin by Russian President Vladimir Putin and Belarusian President Alexander Lukashenko; Lukashenko had already traveled to Moscow for talks on Friday.

According to its President Volodymyr Zelenskyy, Ukraine does not want to be provoked. "We do not react to provocations and strive to create peace exclusively through diplomacy," Zelenskyj wrote on Instagram on his arrival at the Munich Security Conference . His Foreign Minister Dmytro Kuleba, on the other hand, announced: "We are preparing for every possible scenario."

Russia is currently under a lot of criticism: In view of the increasing violence in eastern Ukraine, various heads of state have threatened the country with sanctions. At the Munich Security Conference, Chancellor Olaf Scholz (SPD) said that war was threatening again in Europe. If Russia continues to violate Ukraine 's territorial integrity, it will have "high costs for Russia - politically, economically and geostrategically".

After Scholz, US Vice President Kamala Harris confirmed that the US and its allies would "demand a significant and unprecedented economic price" and "continue to strengthen NATO allies on the eastern flank". Lithuania also campaigned for a stronger US military presence. President Gitanas Nauseda, Prime Minister Ingrida Simonyte and Foreign Minister Gabrielius Landsbergis urged the permanent stationing of US troops in the Baltic EU and NATO country during a visit by US Secretary of Defense Lloyd Austin on Saturday.

For his part, Austin assured the Baltic NATO partners that the United States would support them. "I want everyone in Lithuania, Estonia and Latvia to know, and I want President Putin and the Kremlin to know, that the United States stands by its allies," the defense minister said. Additional US forces have already been sent to Poland, and thousands are ready to be deployed on call.

China is watching these developments with concern. Chinese Foreign Minister Wang Yi warned against further eastward expansion of NATO. "NATO was a product of the Cold War era," Yi said at the Munich Security Conference. "Now you have to look at the present, there must be an adjustment in NATO." The Europeans must ask themselves whether a continuous expansion of the alliance to the east really serves peace in Europe.

Meanwhile, separatist leaders in eastern Ukraine are attempting to mobilize able-bodied men as armed forces. Denis Puschilin, the head of the pro-Russian, internationally unrecognized government in the Donetsk region, published a statement on Saturday in which he called on reservists to appear at the drafting offices. Shortly thereafter, the separatist leader in the Luhansk region, Leonid Pasechnik, issued a similar order.

Pushilin cited an "imminent threat of aggression" from Ukrainian forces, which Ukrainian officials had previously denied. "I appeal to all men in the republic who can hold arms to defend their families, their children, wives, mothers," Puschilin said. "Together we will achieve the coveted victory we all need."

This was preceded by an increase in violence between Ukrainian soldiers and Russian-backed rebels. The escalations fueled fears that Russia could use the situation as an excuse to invade. According to Ukrainian sources, among other things, a convoy carrying humanitarian aid was hit by projectiles. A journalist from the AP news agency reported on a car bomb that was detonated in the city of Donetsk on Friday.

In order to de-escalate the situation, the foreign ministers of Russia and France had phoned each other. Apparently no convergence has been achieved. French Foreign Minister Jean-Yves Le Drian said after the call that it was up to Russia to continue the dialogue. Russian Foreign Minister Sergei Lavrov continued to insist on the security guarantees demanded by Russia. Ignoring Russian security interests jeopardizes stability in Europe and around the world, Lavrov said.

The Russian government also reiterated its classification of developments in eastern Ukraine as "genocide." The fact that Chancellor Olaf Scholz rejected this assessment made by the Russian President is unacceptable, according to the Russian Foreign Ministry, according to the Interfax agency. The ministry is quoted as saying that top German politicians are not allowed to make jokes about genocide issues.