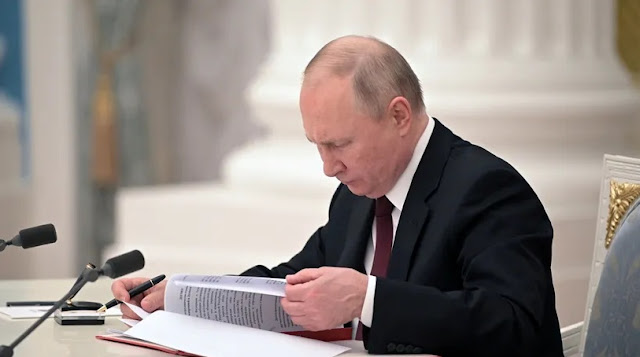 In an act of the greatest possible staging, Russia's president recognizes the separatist areas in Ukraine. And Vladimir Putin could escalate further at any time.

This Monday was a day entirely to Putin's taste, orchestrated down to the last detail. In the morning, the Russian state media unleashed a whole avalanche of largely unsubstantiated allegations against Ukraine: the Ukrainian army was about to invade the areas in the east of the country controlled by pro-Russian fighters.

Ukrainian soldiers have planned terrorist attacks and are taking the civilian population under artillery fire. The Russian secret service FSB also provided footage of an alleged Ukrainian attack on a Russian border post in the Rostov region.

Shortly thereafter, the two Moscow-loyal separatist leaders sent a video message to Vladimir Putin asking for "recognition of their independence" and military assistance from Russia. Almost at the same time, Putin had already summoned the members of the Moscow Security Council to the Kremlin.

The heads of the most important secret services, speakers of the two chambers of parliament, foreign and defense ministers, the head of government and also the vice-chairman of the Security Council, Dmitry Medvedev, nodded to this request in short appearances in front of the cameras, before Putin theatrically withdrew for several hours. In fact, Putin's timetable left little doubt that the two people's republics would be recognized on the same day. Putin finally announced the decision live on television, before which he gave a one-hour speech.

In this speech, Russia 's president repeated many of his previously expressed, highly personal theses on the history of the neighboring country. Ukraine, according to Putin, owes its existence entirely to Russia, which conquered important areas that were part of modern-day Ukraine from nations like Poland and Turkey. Only in the last part of his speech did Putin turn to NATO: the West could not accept that Russia continued to exist in its size. Therefore, even a hypothetical possibility of Ukraine joining NATO is an existential threat to Russia.

Putin did not discuss how recognizing the so-called People's Republics of Donetsk and Luhansk would allay Russia's security concerns about NATO. But he repeated the propaganda of the Russian state media that Ukraine was allegedly preparing a genocide against the Russian-speaking population of eastern Ukraine.

The leaders of the two breakaway Ukrainian territories had already started moving civilians from their territories to Russia, despite the fact that there have been no signs of an actual Ukrainian offensive in recent days.

Russia can escalate further at any time

Rumors circulated in Moscow on Monday evening that regular Russian troops could occupy the separatist areas that belong to Ukraine under international law by Tuesday at the latest. Immediately after his speech, Putin signed a decree recognizing the independence of Donetsk and Luhansk and ordering Russian armed forces to perform "peacekeeping functions" in those areas.

Eyewitnesses from the separatist areas reported that several columns of armored vehicles from Russia crossed the border before midnight. In addition, Putin signed two friendship treaties between Russia and the two separatist republics; these treaties provide for a permanent Russian military presence.

All of this probably spells the final end for the Minsk Agreement, which the Russian diplomats have been insisting on up until now.

Furthermore, Russia can further escalate the situation at any time. For one thing, Putin has not dropped his demands for security guarantees and for Ukraine's rejection of NATO membership. On the other hand, the People's Republics are claiming a significantly larger area of ​​Ukraine than they have de facto controlled up to now.

For example, it may turn out that today's Russian recognition also includes those areas that are currently under the control of the Ukrainian military. The Kremlin did not release any details on Monday. Later in the evening, however, the Federation Council said that the declarations of independence will probably only cover the part of Donbass controlled by separatists.

The already tense situation has become even more difficult. Especially since Putin ended his TV speech with an ultimatum to Ukraine: According to the Russian President, the country must stop using violence against the people's republics now officially recognized by Russia. "Otherwise, the responsibility for further acts of war would lie entirely with the Kiev government," said the president.

In the past few days, Russia has not been able to provide any credible evidence for its allegations against the Ukrainian armed forces. In plain language, Putin's threat should mean that the Russian army is still ready for a military strike against Ukraine.