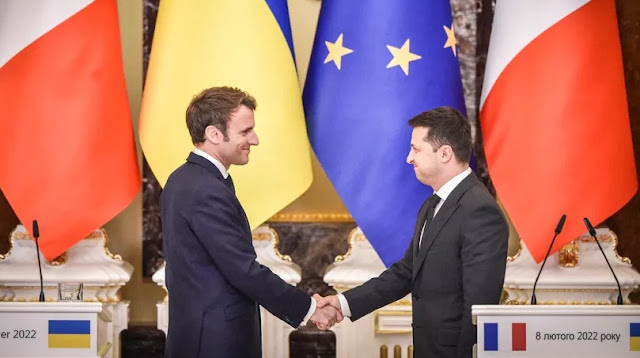 Russia has recognized France and Ukraine's commitment to the so-called Minsk Agreement to end the war in Ukraine. "There were positive signals that a solution for Ukraine can only be based on the implementation of the Minsk agreements," said Kremlin spokesman Dmitry Peskov. "That's right.

And that's a plus point," he was quoted as saying by the Russian news agency Interfax.

At the same time, Peskov again accused Ukraine of being unwilling to implement the obligations under the agreement. There are no signs that the Ukrainian government is ready "quickly" to do what "Kiev should have done long ago," said Peskov. "That's why there are both positive and less positive signals."

"The situation remains tense but under control"

The Ukrainian Foreign Minister Dmytro Kuleba also acknowledged the contribution of the western allies to the de-escalation of the conflict with Russia. "The situation remains tense but under control," he said after meeting his Spanish counterpart José Manuel Albares in Kiev.

There are "real chances for a diplomatic solution," said Kuleba. "The way the European community responds to this crisis will determine the future of European security and of every single European state."

At the same time, he called for further western sanctions against Russia. There is already a basis for this, since Russia has already violated international law, said Kuleba. The minister referred to the issue of Russian passports to residents in the separatist areas in eastern Ukraine.

French President Emmanuel Macron met his Ukrainian counterpart Volodymyr Zelenskyy in Kiev on Tuesday. Macron said there that the implementation of the 2015 peace plan was the only way to resolve the conflict. Marcon had previously met with Russian President Vladimir Putin in Moscow.

France currently holds the EU Council Presidency. Together with Germany, the country is trying to find a solution to the war in eastern Ukraine in the so-called Normandy format. Representatives of the four states will meet in Berlin on Thursday for further talks.

According to UN estimates, more than 14,000 people have been killed in fighting between the Ukrainian army and pro-Russian separatists in eastern Ukraine since 2014. Ukraine and Russia regularly accuse each other of violating the Minsk peace plan. Russia has also criticized Ukraine's refusal to engage in direct negotiations with the separatists.

A massive deployment of Russian troops along the border with Ukraine has also been causing international concern for several weeks. In total, Russia has assembled more than 100,000 soldiers there.

This fuels fears that Russia could attack the neighboring country. NATO has therefore also increased its troop presence in its eastern member states. Russia denies having plans to attack and says it feels threatened by NATO.