Russia Crisis: Europe Is Preparing For A Possible War 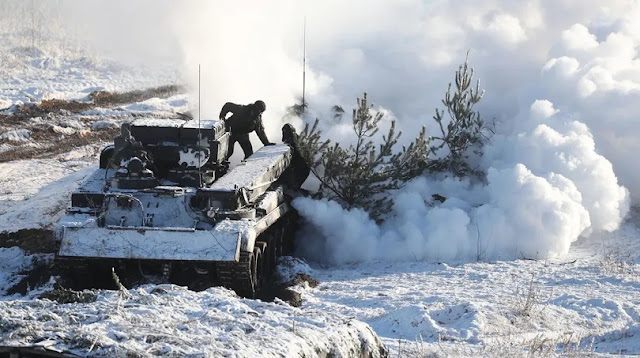 Cleared embassies, Russian maneuvers, US fighter jets in Romania: the situation in Ukraine is getting worse and worse. At least we still talk to each other.

The US has warned that a Russian attack on Ukraine could take place during the Olympics. The situation surrounding the threatening Russian troop deployment on the border with Ukraine is now very tense. Well over 100,000 Russian soldiers are said to be there now.

In Belarus, on the border with Ukraine, Moscow is holding a joint maneuver with the hosts. Russian naval maneuvers in the Black Sea near the Ukrainian coast are also part of the military threat surrounding Ukraine. An overview of the events of the past 48 hours:

**Both the presidents and the chief diplomats of Russia and the USA will speak to each other on Saturday: US Secretary of State Antony Blinken with his Russian counterpart Sergey Lavrov, Joe Biden with Vladimir Putin. The two presidents last spoke to each other on the phone at the end of December. The US is ready to solve the crisis "through diplomacy and dialogue if Russia is really interested," said Blinken. "So far we've only seen escalation from Moscow."

The Secretary of State reiterated that if Russia invaded Ukraine, Washington and its allies would "swiftly" impose sanctions on Russia. The US is "prepared for anything that should happen". After the talks, Lavrov said the US and its allies had "provocative goals" and encouraged Kiev to "sabotage the Minsk agreements and harmful attempts at a military solution to the Donbass problem". The Donbass in eastern Ukraine is occupied by militias loyal to Moscow.

**The US government is bringing more soldiers and military equipment to NATO's eastern border. The US Air Force has deployed eight F-16 fighter jets to Romania from the US Air Force base in Spangdahlem in the Eifel region. The planes arrived at Borcea Air Base, 150 kilometers east of Bucharest, the Romanian Defense Ministry said. They would join 150 US soldiers in joint exercises with the Romanian military, the statement said. The maneuvers would last two weeks. A few days ago, four US Navy F/A-18 Super Hornet fighter jets and 50 US soldiers had already arrived in Borcea. In Romania, around 1,000 US soldiers and Stryker wheeled armored vehicles will also reinforce the Romanian security forces.

**In Bulgaria, the second Eastern European NATO country on the Black Sea, four Eurofighters from NATO country Spain are to help with airspace surveillance. Naval maneuvers in the Black Sea near the Ukrainian coast are currently part of the Russian military threats surrounding Ukraine. The Pentagon also announced that it would send 3,000 additional US troops to Poland . These are paratroopers from the 82nd Airborne Brigade based out of Fort Bragg. US Secretary of Defense Lloyd Austin had already ordered the deployment of 1,700 more soldiers to Poland in early February.

**The US is preparing to evacuate its embassy in Kiev. The State Department on Saturday will tell virtually all of its nearly 200 American employees to leave Ukraine before a possible Russian invasion or get close to the Polish border, government officials said. In Kiev, only a small part of the workforce should maintain the US diplomatic presence. In addition, all US citizens in Ukraine should be asked to leave the country within 48 hours.

**The Federal Foreign Office also published such a request on Saturday. Foreign Minister Annalena Baerbock (Greens) said Germans who do not necessarily have to be there should leave Ukraine . In addition, the consulate general will be relocated from the Donetsk region to Lviv near the Polish border. The embassy staff will be reduced, but the German embassy in Kiev should remain open. "We are ready for dialogue," said Baerbock. At the same time, however, one must be prepared for all possible scenarios.

**White House National Security Advisor Jake Sullivan said Friday that Russian President Vladimir Putin can now issue an attack order virtually any day. If there is a Russian invasion, there will likely be airstrikes first and then a ground offensive, making it almost impossible to leave the country. NATO allies Italy, Spain, Great Britain, Canada, Denmark and Norway have also asked their citizens to leave Ukraine, as has New Zealand.

Sanctions should hit the Russian financial and energy sector, possible targets are Russian banks like the market leaders Sberbank and VTB. Exceptions to this would probably be made to limit the burden on western companies. Export controls for Russian technology and armaments products as well as sanctions against individual Russian oligarchs are also possible.