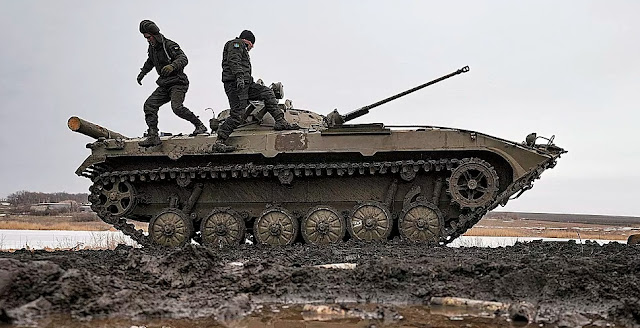 Moscow warns it will strike back if Ukrainians start killing Russian citizens, says troop departure "does not depend on hysteria in the West".

Military districts in the South and West of Russia have begun to return their troops to their places of origin after completing their military exercises, the Russian Defense Ministry announced. The Russian-Belarusian military exercises Allied Resolution 2022 continue until February 20.

In recent months, concern has grown about the large accumulation of Russian troops on the border with Ukraine and the preparation of a possible military invasion. The Russian military concentration continues at the moment.

Moscow has warned that the country's Armed Forces continue to carry out "large-scale operational training activities." According to Russian Defense Ministry spokesman Igor Konashenkov, "almost all military districts, navies and airborne troops" in the country participate in the exercises. In statements broadcast by the Russian government channel RT, Konashenkov stressed that all Russian troops will return to their barracks once the maneuvers are over.

The Russian presidential spokesman, Dimitri Peskov, has recalled that Ukraine is only part of a much larger problem : the security guarantees required by Russia, which wants NATO far from its borders. Russia has issued another warning. Moscow will fight back if the Ukrainians start killing Russian citizens, "including in the self-proclaimed republic of Donbas." Vladimir Chizhov, Russia's permanent representative to the European Union, has said so. Chizhov told The Guardian that Russia "will not invade Ukraine unless provoked."

Moscow will continue its dialogue with the West on security issues and is ready to hold separate talks on intermediate-range nuclear missiles, Russian Foreign Minister Sergei Lavrov said Tuesday, noting that the departure of some Russian troops from the area of the Ukrainian border was programmed and " does not depend on the hysteria of the West ".

According to the Russian foreign minister, the West responded positively to Russian security proposals that it had ignored for a long time. The Russian Foreign Minister promised to respond shortly to the sending of security documents by the US and NATO. And he added that if Ukraine were to abandon its plans for NATO membership it would draw a sigh of relief.

The current president of the Organization for Security and Cooperation in Europe (OSCE), the Polish Foreign Minister, Zbigniew Rau, met in Moscow with Lavrov, who described the US reports pointing to a Russian invasion as "information terrorism". imminent. Lavrov noted that trust with the OSCE countries "is at a minimum," recalling that while discussing security demands for Russia within the OSCE is interesting, this does not replace talks with the United States and NATO.

Meanwhile, Ukraine's Foreign Minister Dimitro Kuleba said Kiev would "believe in de-escalation" only after seeing Russia's withdrawal, the Interfax Ukraine news agency reported. "We continually hear different statements from the Russian federation, so we have a rule: we believe what we see. If we see the withdrawal, we will believe the de-escalation," Kuleba said.

Russian deputies will ask Russian President Vladimir Putin today, which formally recognizes the separatist-controlled regions of eastern Ukraine as independent states. Two resolutions are going to be approved: one is addressed directly to Putin and the other, presented by the ruling United Russia party, promotes consultations with the Russian Defense and Foreign Ministries before its approval. Various experts have pointed to the Russian recognition of Donbas as a possible prelude to an annexation of that part of the region.