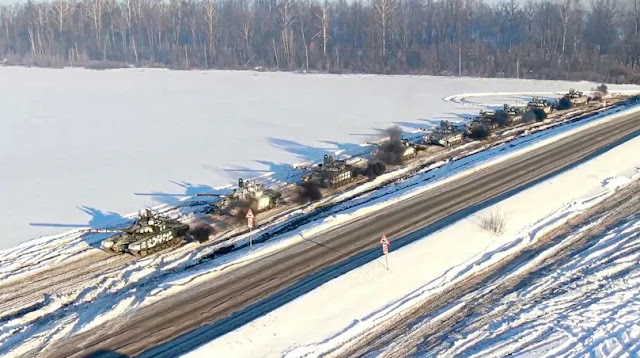 The US government classifies the partial withdrawal of Russian troops announced by the government in Moscow to ease the Ukraine conflict as false information and instead assumes that the military presence will continue to expand.

In "the past few days," Russia has brought about 7,000 additional troops near the Ukrainian border, "and some of them just arrived today," a senior White House official said. Findings from the US government meanwhile show that Russia's announcement of a partial withdrawal was wrong, he said.

The official said in a briefing for journalists in Washington that Russia says it is open to a diplomatic solution to the conflict. "But all the evidence we have now is that they are only offering talks and making claims of de-escalation while secretly mobilizing for war," the representative said. According to the rules of the briefing, the official could not be named.

Chancellor Olaf Scholz (SPD) and US President Joe Biden confirmed in a telephone call that there is still a risk of Russian military aggression against Ukraine . This was announced by government spokesman Steffen Hebestreit. Great vigilance is required. The situation in the border area with Ukraine is "extremely serious" because of the massive Russian troop deployment, he said.

Scholz also briefed the US President on his visit to Russian President Vladimir Putinthe day before. The US President and Chancellor welcomed statements by Putin that diplomatic efforts with the West should be continued. It is now important to pursue them further with high pressure. It is important to enter into a constructive dialogue on questions of European security, to implement the Minsk agreements and to make progress in the Normandy format with the support of Germany and France, it said.

According to Scholz and Biden, the key to this lies in Moscow. Russia must take real steps to de-escalate. In the event of further military aggression against the territorial integrity and sovereignty of Ukraine, Russia can expect extremely serious consequences. The western allies fear that Russian troops could invade the neighboring country in view of the deployment of Russian troops along the border with Ukraine. According to the latest information from the USA, there are now a total of around 150,000 Russian soldiers on the borders in the north, south and east of Ukraine, in addition to heavy equipment.

Russia denies invasion plans and says it feels threatened by NATO. Putin is demanding far-reaching concessions from Western countries, which he describes as security guarantees. Among other things, he demands a commitment that Ukraine will not join NATO and a withdrawal of NATO troops from the eastern member states of the military alliance.

"No rotten compromises with Russia"

Most recently, the Russian side in the conflict had sent slight signals of relaxation and announced that it had withdrawn troops from the Ukrainian border. According to NATO Secretary General Jens Stoltenberg, the opposite is the case and Russia is continuing to rearm. Germany demanded evidence from Russia that soldiers had been withdrawn.

In his own words, Ukrainian President Volodymyr Zelenskyy sees no signs of a partial withdrawal. "We're seeing small rotations," he said in a televised address, adding, "I wouldn't call these rotations a withdrawal of Russian troops." US Secretary of State Antony Blinken made a similar statement. The Ukrainian ambassador to Germany, Andriy Melnyk, warned the German government against "rotten compromises" with Russia. "Today it's not just about averting a new Russian war in the middle of Europe," Melnyk told the newspapers of the Funke media group. The Ukrainians hoped that decisions would not be made over their heads.

The traffic light government must not make any concessions to Putin, on the one hand to confirm free alliance elections and at the same time not to postpone Ukraine's NATO membership until the end of the world, Melnyk said.

Ukraine also hopes that Scholz will convene a Normandy-style summit at the highest level in Berlin in the coming weeks in order to overcome "a highly dangerous speechlessness and radio silence between President Zelenskyy and President Putin".