Mali, The 'Afghanistan' Of France? 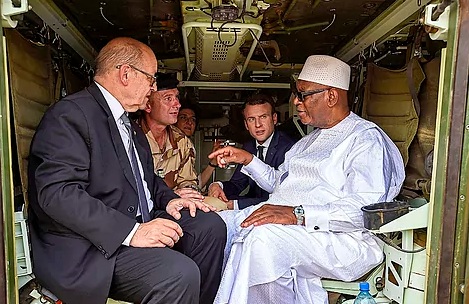 The hostility of the Malian military junta towards the presence of French troops and their failure in the fight against terrorism has pushed Paris to rethink its deployment in the Sahel while Russia increases its presence and influence.

The Sahel, and specifically Mali, is on its way to becoming France's Afghanistan. The rupture between Paris and Bamako that has been staged with the expulsion of the French ambassador on Monday, has made the Elysee rethink its mission to combat jihadism.

Since a military junta seized power in Bamako in May 2021, Paris has been falling out of favor and losing influence. Instead, Russia is taking positions through its Wagner group mercenaries and the emergence of this 'new' actor on the Sahelian chessboard complicates the political balance.

The situation cannot continue like this", recognized the French Foreign Minister, Jean-Yves Le Drian , in statements to the state channel France 2. "The rupture" that the Malian Junta has forced, admits the minister, "leads us to ask ourselves about our position" in Mali. The military in power in Bamako allege that the expulsion of ambassador Joel Meyer is due to "hostile" statements by the French government.

He has not maintained good relations with the uniformed men, beginning with his displeasure at the announcement in July by the president, Emmanuel Macron, to reduce his troops. Following by France's reaction to the decision of the putschists to stay in power for at least five years and not immediately begin the promised civil transition. And ending with the description of "illegitimate" that Le Drian launched at the coup plotters.

The military led by Colonel Asimi Goita have spread their animosity to other European countries. Specifically, the Board demanded the departure of the contingent sent by Denmark, which on January 27 announced that it would withdraw its troops, which was followed by Sweden. Its scourge has also fallen on the Economic Community of West African States (ECOWAS), whose representative in Bamako has been exiled after the regional organization imposed economic and diplomatic sanctions on the military power for postponing the elections.

This, increasingly isolated, entrenches and affirms that it does not exclude "nothing" in terms of relations with France in the midst of the increase in popular discontent against the former metropolis. All this in an increasingly hostile Sahelian context, after Burkina Faso has experienced a recent coup d'état precisely motivated by the increase in extremist violence. In Chad, a military government was installed in April 2021 after the death in combat of President Idriss Deby.

And Mali itself has suffered two military coups in less than a year: one in August 2020 and the other last May. In this area, one of the poorest on the planet, various elements of instability converge, from climate change to illicit trafficking. Meanwhile, the violence of the armed groups is on the rise. According to the American think tank Center for Strategic Studies in Africa (ACSS),terrorist actions by jihadist groups in the Sahel increased by 70% in 2021.

France - and the European Union with it - have their backs against the wall in Mali, considered the "advanced border" of the old continent, key to containing jihadist terrorism and human trafficking and immigration. Meanwhile, a door is opening for Russia in the African region, at a time when the crisis with Ukraine highlights its threatening military presence in Eastern Europe. Wagner already has a significant presence in the Central African Republic, Sudan, Mozambique or Libya, not exempt from accusations of exactions.

Paris and Brussels have accused the Malian junta of hiring Russian mercenaries, something the colonels deny. On Thursday, the head of the US Military Command in Africa (Africom), General Stephen Townsend, put Wagner's soldiers of fortune at "several hundred" and assured that his payroll costs the Bamako authorities 10 million dollars a month. "They are a bad presence and they are not going to contribute to the stability or security of Mali," he said.

"Our country is occupied by terrorists. We are looking for a partner to liberate our country. We have returned to our historical partner in defense matters, since 80% of our officers are trained in Russia," the Malian Prime Minister admitted, however Choguel Maiga. The first Wagner militiamen, a private mercenary company close to the Kremlin thanks to the friendship of its owner, Yevgueni Prigozhin, with Russian President Vladimir Putin, would have arrived in December.

While the Russian military presence enjoys good press, the French deployment generates popular rejection, which has been expressed in citizen demonstrations in the last two years. In this context, France's intention is to review the military deployment between now and mid-February, when the European Union-Africa summit is scheduled. A departure of French troops from Mali will drag down the European contingent that supports them. "Our European partners are very concerned about the recent signals from the Board," a French diplomatic source told Efe this week. The idea is to maintain anti-terrorist operations in the Sahel, but with a greater role for local forces.

France intervened in Mali in January 2013, under the presidency of the socialist François Hollande, to counteract the advance of jihadism. Thus began 'Operation Serval', which in record time managed to recover emblematic cities such as Timbuktu from the hands of extremists.

In mid-2014, France converted 'Operation Serval' into 'Barkhane', bringing together the support of European partners such as Spain, and extended the radius of intervention to other Sahel countries such as Mauritania, Burkina Faso, Niger and Chad.

But France has been stuck in the swampy Sahelian conflict for months and last summer announced that it aimed to reduce its military presence in Mali.from 5,000 troops to between 3,000 and 2,500 by 2023. Several international missions converge on Malian soil with military contingents and security forces with the aim of fighting jihadism and reinforcing local forces. On the one hand, there is the Minusma, which under the umbrella of the UN has 18,000 troops.

Europe is involved in the EUTM Mali mission, to train the Malian army, with 1,200 troops. The French 'operation Barkhane' currently has 4,800 soldiers, and has a European leg, the Takuba Force, with 900 special forces soldiers. To them are added 5,000 boots from the Sahel Joint Force, made up of the countries of the region.

This makes Mali one of the countries with the highest concentration of international forces, in a complex interconnection. "One of the biggest problems with the foreign troops is that they do not understand the context of violence, because it is a very locally rooted violence with many complexities between different communities," estimates Ibrahim Yahaya Ibrahim , analyst for the Sahel of the International Crisis Group, in ' Foreign Policy'. "At least the French can speak a language that some locals understand."

For Europeans, rethinking this presence means transforming it into a force "more discreet, more intertwined with local armies and one that respects local sensitivities," in statements collected by Efe. Spain is in favor of analyzing in a "serene and objective" way the situation of EUTM Mali , a contingent in which it is the largest contribution (more than 500 soldiers) after France.

In the midst of the French Presidency of the EU and with less than three months to elect the next tenant of the Elysee, a French withdrawal from Mali would be a serious setback for Macron's image -although he has not officially announced it, no one doubts that he is running for the re-election. As background, the failure of the anti-jihadist mission in the Sahel deployed for almost a decade. The scenario of a rapid departure of troops 'to Afghanistan' is gaining more and more strength.