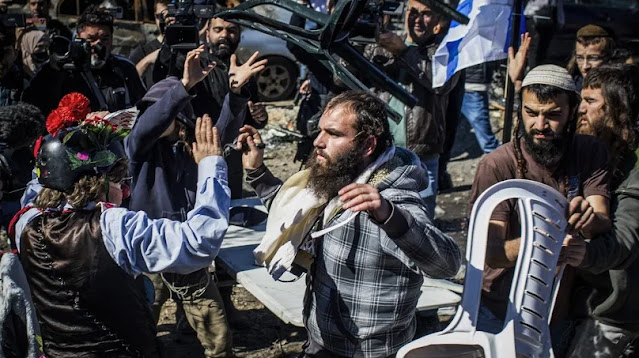 In Sheikh Jarrah, many Palestinians are still at risk of being thrown out. When the apartment of a Jewish settler catches fire, new arguments break out.

Violent clashes have broken out again between Palestinian residents and Jewish ultranationalists in East Jerusalem.

Flash grenades were heard exploding throughout the evening as police attempted to disperse protests. A video has been circulating online showing an Israeli police officer kicking a young Palestinian man. But the ultra-nationalist MP Itamar Ben-Gvir also accused the police of "extreme brutality" against his supporters.

The clashes took place in the Sheikh Jarrah district. There was also unrest there last year, which was partly responsible for the beginning of the eleven-day war between Israel and the Islamist Hamas in the Gaza Strip. Dozens of families from the neighborhood are still threatened with being evicted from their homes by Jewish settler organizations. Tensions between the two sides repeatedly escalated into violence.

The new clashes erupted after a settler's home was set on fire over the weekend. MP Ben-Gvir then set up an office in a tent in Sheikh Jarrah on Sunday morning. Enraged Palestinians stormed it that afternoon, throwing chairs and scuffles with supporters of the ultra-nationalist. Ben-Gvir announced that he would stay in Sheikh Jarrah overnight.

He accuses the police of not adequately protecting Jewish settlers in Sheikh Jarrah from violent Palestinians. "Jewish lives have become worthless," he wrote on Twitter before his visit. The member of the Religious Zionists party is a self-confessed admirer of the Jewish assassin Baruch Goldstein, who murdered 29 Palestinians in Hebron in 1994. Ben-Gvir told reporters at the scene that he would remain in Sheikh Jarrah until police provided security.

The Palestinian Authority in the Israeli-occupied West Bank condemned Ben-Gvir's visit as "a provocative and escalating move that threatens to unleash violence that will be difficult to control." The EU Mission to the Palestinian Territories tweeted that "irresponsible provocations and other escalating acts in this sensitive area only fuel tensions and must end."

Hours after violent clashes in East Jerusalem, a Palestinian has been shot dead amid unrest in the West Bank. The Palestinian Ministry of Health said the 17-year-old was shot in the head.

The renewed unrest erupted after Israeli forces entered the village of Silat al-Harithiya near Jenin to demolish the homes of two Palestinian prisoners. According to the army, "violent unrest" then broke out, in which "hundreds of Palestinians" took part. Some of them threw explosives on the soldiers.

Israeli forces regularly demolish the homes of Palestinians accused of carrying out attacks on Israelis in the West Bank or East Jerusalem. This practice has been condemned by critics as a form of collective punishment. Israel, on the other hand, says that this could deter further potential attackers.