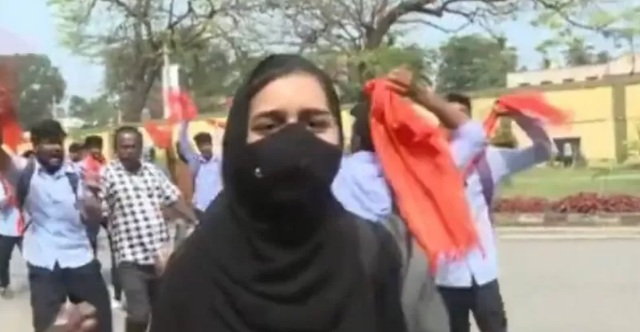 In Karnataka, a hijab-wearing college student has said after being harassed that her priority is her education, but "behind a piece of cloth they are depriving us of our right to education."

It is to be noted that for the last one and a half months in Karnataka, there has been a dispute between the students and the administration over hijab in many colleges and this matter is now in the High Court.

But in recent days, it has come to light that the hijab is now being compared to saffron shawls, which reflect the divisions of Indian society along religious lines.

Malala Yousafzai, a Nobel Peace Prize laureate and human rights activist , has tweeted a statement from a college student about the ongoing hijab controversy in Karnataka.

Expressing her views in this regard, Malala Yousafzai wrote, "Preventing girls from coming to school in hijab is a terrible act. Women are still being targeted for wearing more or less clothes. She appealed to Indian leaders to stop denigrating Muslim women.

"Don't we have the right to wear hijab?"

The video, which went viral on social media, was posted by Alt News founder Muhammad Zubair with the words: "When a Muslim girl arrived at PES College, a number of students wearing saffron shawls harassed her. Maskan Khan is a Muslim student who was harassed by boys waving saffron shawls in Karnataka.

In the video, a student in a black burqa rides a scooter to PES College Bangalore and as she walks towards the building, a group of hundreds of students waving saffron shawls and chanting 'J Shri Ram' to her. In response to the harassment, the student chanted 'Allah Akbar' and said in the local language, 'Don't we have the right to wear hijab?'

'Our priority is our education'

"Our priority is our education, they are depriving us of our right to education behind a piece of cloth," he said in an interview with Indian channel NDTV. According to Muskan, she has always worn a burqa, but when she goes to class, she takes off her burqa and wears only hijab. She says her principal never objected, and the uproar began last week.

Weren't they frightened when so many harassers surrounded her? "No, I wasn't upset at all. I was just going to submit an assignment, but because I was wearing a burqa, they wouldn't let me into college," she says. "As soon as they saw me, they started blocking my way and started chanting slogans of J. Shri Ram, after which I also chanted the slogan of Allahu Akbar," she says. According to Miskan, her college professor and principal have protected and supported her and she believes that the majority of the students who harassed her came from outside and only 10% of the college students were involved.

In answer to this question, are they worried after this incident? "No, I'm not worried at all. From the morning till now, everyone from the police to everyone else has been coming and telling me that we are with you, don't worry at all," she says. If she is barred from coming to college wearing hijab, will she be able to continue her education? "The hijab is part of our identity," he said. The principal never said anything. It's all started by outsiders. The principal has advised us not to wear the burqa. We will continue to protest for hijab. It's part of the identity of a Muslim girl."

It is alleged that some political parties have been distributing saffron shawls to students since the hijab controversy broke out in India and are fueling the controversy. In a video posted by Indian journalist Naveedita Narenjan Kumar, MGM College students can be seen carrying saffron shawls. According to Nodita, the shawls were allegedly distributed by Hindutva organizations.

Naveedita has posted several videos and photos of the riots at MGM College over the hijab controversy, with hundreds of students wearing saffron shawls and hats chanting slogans like 'Jay Shiva Ji' against burqas and hijabs. In another such photo, teachers at Edge GM College are asking hijab-wearing students to leave the school.

What is being said in this regard in India?

Bollywood actress Pooja Bhatt , while posting a harassing video of a hijab-wearing Muslim student at PES College Bangalore, wrote, "As usual, a gang of men is needed to intimidate a woman."

He rebuked the students, tweeting that "waving shawls as a weapon, trying to hide their weakness from oppression, these people are an insult to human beings." She says a large part of the lost generation has fallen victim to hatred. Former Chief Minister of Indian-administered Kashmir Mehbooba Mufti tweeted, "Harassment of a Muslim girl in broad daylight without any fear shows that such thugs have the patronage of the people in the government."

Mufti further said that such incidents should not be seen as mere incidents as the BJP hopes that such incidents will help them win the UP elections. Former Chief Minister of Indian-administered Kashmir Omar Abdullah also shared the video with the words, "Hatred against Muslims has become commonplace in today's India." We are no longer a nation that celebrates diversity, we want to separate people and punish them. Indian journalist Rana Ayub wrote , "Thousands fight against a woman wearing hijab". Tagging Prime Minister Narendra Modi, Rana asks, "I thought you were a supporter of women's emancipation and wanted to educate them." "I hope the world sees the hatred that this country has for Muslim women," she said.

Dr. NC Asthana, an Indian physicist and retired IPS officer, says there are few words in English to condemn him. They ask, 'How can you do this to a girl, whether she is alone or with someone? You protest against the government or the college, why are you harassing a lonely girl by harassing her.

Ravinder Singh , founder of Khalsa Aid, has called it the 'new and scary face of a new India'. "Right-wing thugs are harassing and threatening a lone Muslim woman," he tweeted. Along with Pakistanis, most Indian Muslims are calling the young girl a "tiger" and praising her courage.

Pakistani singer Mesha Shafi has also called her a tiger. Meanwhile, Indian actress Sawira Bhaskar termed the behavior shown in the video as shameful. According to Indian media, all schools and colleges in the Indian state of Karnataka have been closed for three days after today's riots.

Karnataka Chief Minister Biswaraj S. Bomai has appealed to all students, teachers and administrators of schools and colleges as well as the people of Karnataka to maintain peace and harmony. It may be recalled that during the ongoing controversy over hijab in India this week, the government of the southern state of Karnataka had issued a new order to make uniforms compulsory in universities and colleges. The ruling by the ruling BJP government in the state came ahead of a hearing in the Karnataka High Court.

The Karnataka High Court is hearing petitions filed by five female students of a government college in ODP after the two petitions were filed against them for refusing to wear hijab. They said that they could not be prevented from wearing hijab because it is their basic right which is given to them by the Constitution of India. The High Court will continue hearing today.

Since last month, eight female college students have not been able to attend classes for several weeks due to the crackdown on hijab by the administration of ODP's government pre-university college.

When pictures of these students sitting on the steps of the school surfaced on social media, many people termed it as a violation of the religious freedom enjoyed by the citizens in the Constitution of India.