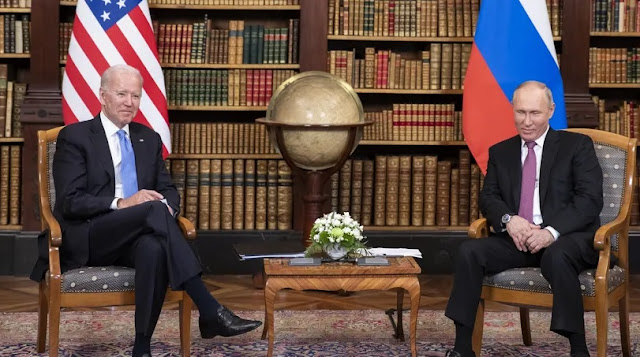 The US President and his Russian counterpart have agreed to a meeting. However, for this to happen, Russia must not attack Ukraine.

According to the Elysée Palace in Paris, US President Joe Biden and his Russian colleague Vladimir Putin have "in principle" agreed to a summit meeting proposed by French President Emmanuel Macron in the conflict between Russia and Ukraine.

The meeting "can only take place if Russia does not invade Ukraine," said the Elysée on Monday night after Macron had previously telephoned the two heads of state. Shortly thereafter, Biden's press secretary, Jen Psaki, declared that the US was "obligated to continue diplomacy until the commencement of an invasion." Biden has "agreed in principle to meet with President Putin ... if there is no invasion."

According to France, the meeting between the presidents of the USA and Russia will be prepared by the respective foreign ministers, Antony Blinken and Sergey Lavrov, at their meeting on Thursday. Lavrov is scheduled to meet his French colleague Jean-Yves Le Drian on Monday.

Discussions with everyone involved

Macron proposed a summit meeting "with all stakeholders" in the conflict, following the direct talks between Biden and Putin. It should be about "security and strategic stability in Europe".

Macron spoke to Putin twice on Sunday. According to the Kremlin, during the first phone call, Macron and Putin agreed to "facilitate the restoration of the ceasefire and ensure progress in resolving the conflict." In the conversation, Putin also denounced "provocations" by the Ukrainian army. Macron then spoke to Biden before calling Putin again in the evening.

Moscow states that it feels threatened by NATO's eastward expansion and, according to Western information, has gathered around 150,000 soldiers on the border with Ukraine. Including the troops of the pro-Russian separatists in Ukraine, there could be up to 190,000 soldiers. However, Moscow denies any attack plans. The announcement from Moscow that it would withdraw its estimated 30,000 soldiers from neighboring Belarus was initially seen as a possible sign of relaxation. However, the Belarusian Defense Ministry has now said that President Alexander Lukashenko and Putin have decided to continue their joint military maneuvers in view of the "escalation" of the conflict in eastern Ukraine.

This representation "does not correspond to the statements made by President Putin," said the Elysée Palace after Macron's first phone call with the Kremlin boss. The latter announced his intention to withdraw his troops from Belarus after the ongoing military exercises had been completed.

According to the Kremlin, Macron and Putin also agreed in their phone call that the search for solutions should be intensified in view of the flare-up of violence in eastern Ukraine - including in the so-called Normandy format with representatives of Russia and Ukraine under Franco-German moderation. The aim is for the ceasefire to be observed again in eastern Ukraine and for progress to be made in resolving the conflict.

In eastern Ukraine, the Ukrainian army and Moscow-backed separatists have been at odds since 2014. According to UN estimates, more than 14,000 people have already been killed, mostly in the separatist area. A peace plan from 2015 mediated by Franco-German mediation is not implemented.

Ukrainian President Volodymyr Zelenskyy called for the resumption of ceasefire negotiations led by the Organization for Security and Co-operation in Europe ( OSCE ). At the Munich Security Conference, Zelenskyi offered Putin a meeting. However, he also opposed an "appeasement policy" to appease the Russian side and again called for clear prospects for Ukraine to join NATO.

On Sunday evening, the French President also spoke to British Prime Minister Boris Johnson on the phone. According to a spokesman for Johnson's office, the two "agreed that the coming week will be crucial for diplomacy." Johnson welcomed Macron's commitment to seek a diplomatic solution, but stressed that "Ukraine's voice must remain central in all talks." In a letter available to the dpa news agency, the US government wrote to UN Human Rights Commissioner Michelle Bachelet that it feared human rights violations in the event of a Russian invasion.

The US warns against targeted killings, kidnappings, unjustified imprisonment and the use of torture. These actions would target, for example, those who opposed Russian actions, journalists and activists, as well as vulnerable populations such as religious and ethnic groups or the LGBTQI+ community.

Russia denies any intention to attack

Despite the deployment of around 150,000 soldiers on the border with Ukraine, Russia continues to reject Western fears. "There is no invasion, and there are no such plans," Russian ambassador to the US Anatoly Antonov told CBS. Rather, his country wants to continue diplomatic efforts.

NATO, on the other hand, is skeptical about Russia's behavior. NATO Secretary General Jens Stoltenberg said Russia had promised to withdraw troops from the border region but was increasing them. It is not too late for Russia to change course, but the risk of an attack is increasing, he said in the ARD report from Berlin.

According to media reports, the US government has intelligence information that Moscow is said to have given its military orders to proceed with invasion plans. This information from last week is said to have prompted President Joe Biden to testify on Friday that Russian President Vladimir Putin made the decision to attack, the New York Times  and CBS reported. However, the order does not mean that an invasion is certain, as Putin can still change his mind.

Meanwhile, Russia is demanding legally binding guarantees from the West for its security. The Russian ambassador to the US said the western military alliance was not a "peace-loving NGO". "We don't want the next wave of NATO expansion to take place," Antonov said, referring to Ukraine's efforts to join the alliance.

The foreign ministers of the EU states are discussing the Ukraine conflict this Monday in Brussels. The increasing number of ceasefire violations in eastern Ukraine are of particular concern. The Ukrainian Foreign Minister Dmytro Kuleba is also expected to have breakfast together. Foreign Minister Annalena Baerbock will represent Germany.

The Organization for Security and Co-operation in Europe (OSCE) has also called a special session for this Monday. The OSCE has long tried to mediate in the conflict. So far, however, Russia has strictly rejected this and has recently stopped attending a number of meetings.

The Ukrainian ambassador to Germany, Andriy Melnyk, appealed to the federal government to supply his country with defensive weapons after all. He said on Bild-TV that if Germany continues to refuse and Putin actually invades Ukraine in the next few days or weeks, it would be a "failure of German foreign policy."