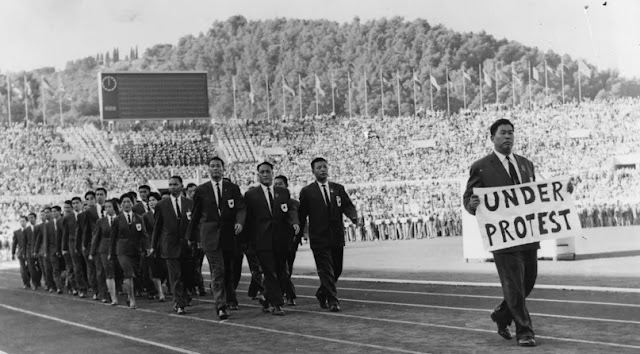 Countries not sending representatives to the Olympics have a long history. China has played a central role in the Olympic boycott in the past.

The US-Americans would politicize the Winter Olympics, China's leadership complained - most recently in a telephone call between the two foreign ministers Wang Yi and Antony Blinken at the end of January. The Biden government announced in early December that it would not have any political or diplomatic representatives from the United States will be traveling to the games.

The US government no doubt has geopolitical motives for the boycott, but it cites good reasons: serious human rights abuses are being committed against minorities in China. Hundreds of thousands of people from the Uyghur people and other Muslim ethnic groups in the north-west of the country were or are being interned in re-education camps. Human rights experts bring this close to at least cultural genocide. In addition, Beijing today treats the citizens of the until recently largely liberal city-state of Hong Kong with open repression.

Australia, Canada, New Zealand and Great Britain have also joined the US diplomatic boycott. They will not send a government delegation to Friday's opening ceremony in Beijing, but their athletes will be able to take part in the competitions. In the EU, the parliament has spoken out in favor of a boycott, but the EU states are divided on the issue. Belgium, Lithuania and Denmark are participating in the political boycott.

The Netherlands, Austria, Sweden and Latvia, on the other hand, are not sending any government representatives, but refer to the corona pandemic as justification. States like Germany or Portugal do not want to send any representatives, but do not explain this further. Japan is also not sending a government delegation to China, but does not want to talk about a diplomatic boycott.

On the other hand, a delegation comes from France, whose President Emmanuel Macron calls the Olympic boycott "useless" - although the next summer games are taking place in Paris and Macron probably wants to avoid potential friction in advance. Hungary's Prime Minister Victor Orbán, who has no problem with autocrats and has long offered himself to the leadership in Beijing in the hope of Chinese investment, does not want to take part in the boycott either.

For the People's Republic of China, it has long been about Taiwan

Whether it's an official boycott or an unofficial absence, the majority of democratic states don't send any high-ranking representatives. That alone is a political issue. And although in the best of all worlds the Olympics should be free of politics , the games have always been political . Boycotts of various kinds were almost always part of this and for a long time also had something to do with China.

A serious boycott of politics and sport was first discussed on the occasion of the National Socialists' summer games in Berlin in 1936. Since 1935, it had been an issue, particularly in the US public, that the Games should take place in a country where racists and anti-Semites were in power. In the end, the opponents of the boycott prevailed in the US Olympic Committee . Historian Ludger Heid goes as far as saying that the US never seriously considered staying away from the Games . In the end, the games were of use to Hitler's propaganda.

After the Second World War, the East-West conflict in particular interfered in the course of the games. Two Chinas were invited to the 1952 Summer Games in Helsinki: the People's Republic of China, which had been founded just three years earlier, and the Republic of China, a military dictatorship led by the nationalists on the island of Taiwan , which, as anti-communists, had the sympathies of the US government. The People's Republic competed with a few athletes, so Taiwan withdrew.

Because the IOC preferred Taiwan as the representative of China to the People's Republic up until the 1970s, athletes from the mainland did not take part in the Olympics for a long time. "There is no country that has ignored the Olympic Charter's mandate to keep politics out of sport more than China," said US foreign policy expert Victor Cha of Georgetown University . Seen in this way, the real Olympic boycott world champion is the People's Republic of China – despite all the complaints Beijing has made about the USA today.

The 1956 games in Melbourne were therefore the first in which individual nations expressly boycotted the Olympics. It wasn't just Mao's People's Republic: because the Soviets violently crushed the Hungarian uprising that same year, the Netherlands, Spain and Switzerland boycotted the games out of solidarity with Hungary. Because of the Suez Crisis , Egypt, Iraq and Lebanon also did not send any delegations. In 1976 over twenty African countries did not take part in the Games in Montreal, Canada, because the IOC had admitted New Zealand; the New Zealanders had played with their rugby team in apartheid South Africa. Taiwan had also withdrawn from Montreal because it was not allowed to compete under the Republic of China name.

The boycotts with the greatest consequences were those of the Summer Games in Moscow in 1980 and in Los Angeles in 1984, because a particularly large number of athletes suffered from them . They were victims of the Cold War: Because of the USSR's invasion of Afghanistan in December 1979, the USA under President Jimmy Carter had called for a complete boycott of the games. Some Western countries, including Germany, as well as a larger group of Islamic countries, followed suit. Washington did not want to give the USSR a platform to make its mark internationally with the Summer Games.

The People's Republic of China supported the boycott, also because relations with the former sister state, the Soviet Union, were extremely bad. The communists in Beijing also did not want to give the Soviets any propaganda success. Athletes from the People's Republic took part in the Winter Games in Lake Placid, USA, for the first time in almost 30 years.

Already in 2008 it was about repression against minorities

In 1984 in Los Angeles, the athletes from the Eastern Bloc suffered from the USSR's revenge boycott, including those from the GDR. For the first time, the People's Republic and Taiwan took part in the Summer Games at the same time, the latter under the IOC name Chinese Taipei.

As in 2022, international human rights groups were already calling for a boycott of the summer games in Beijing in 2008. The reason then - as now - was above all the oppression of minorities. In 2008 it was about China's repression against Tibetans. However, there was no official boycott. No one wanted to put any obstacles in the way of the economically aspiring China. At that time, the governments of Western countries still assumed that the People's Republic would inevitably become somehow more liberal with a growing middle class and increasing integration into the world economy.

That was a grand mistake. On the contrary, under Xi Jinping, the head of the ruling Communist Party, China is as repressive as it was under Mao Zedong - with the difference that the possibilities of digital control are now being fully exploited. The fact that this state will be allowed to host games again in 2022 again raises the question of why the IOC is awarding the Olympics to dictatorships.

Authoritarian regimes in particular use international sports festivals to demonstrate strength both internally and externally and to polish scratches on international reputation. The extent to which this is also the focus of the Chinese CP is shown by the recently bluntly issued threat that foreign Olympians would face consequences if they made political statements.

The Chinese leadership's complaint that Western countries should not politicize the Olympics in Beijing is therefore hollow. Democratic politicians would do well not to appear at the Olympics. However, this signal would be even stronger if more EU countries dared to call the non-appearance of their politicians in Beijing a political boycott.