US, China And Russia: Has The Chinese Ambassador's Statement To The US Salted Russia's Old Wounds? 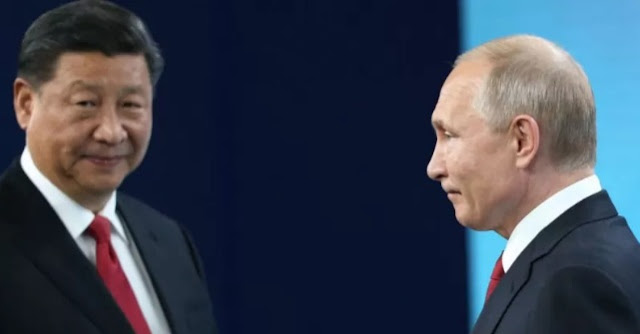 After the collapse of the Soviet Union, the Cold War ended, and no country survived the American monopoly.

It was said at the time that the world would now be governed by a single system. Now, however, a new Cold War is about to break out. This time the United States is competing with China, not Russia.

What China has said so far about this possible or 'ongoing' Cold War is not only seen as a challenge to the United States, but also as a salve to Russia's old wounds.

China's ambassador to the United States, Chen Gang, said in a press briefing on Monday that if the new Cold War continues, China is not the Soviet Union that will lose. Chen Gang also warned the United States to exercise caution in dealing with Taiwan, which could bring the two countries face to face.

Chen Gang also said that nuclear talks with the United States are difficult because China's nuclear weapons are much smaller than those of the United States. Chen Gong's statement was also published by the Chinese embassy on January 24. He was appointed China's ambassador to the United States in July last year.

The details of his statement are as follows: 'Why does it seem that the new Cold War is coming back? This is because some people in the United States have a Cold War mentality and are treating China like the Soviet Union. But China is not the Soviet Union and the United States is not what it was 30 years ago. Therefore, it is in the wider interest of both countries to adopt a peaceful approach.

Chen Gong added that "China has carefully considered the reasons for the collapse of the Soviet Union and has learned from it." "The Chinese Communist Party is not as stubborn as the Soviet Union," he said. The United States is now China's largest trading partner, while China is the third largest trading partner of the United States after Mexico and Canada. He said that bilateral trade between the two countries has exceeded 700 billion this year.

Is the Chinese ambassador's statement a threat to the United States, or is he telling Russia that the Soviet Union would not have collapsed if its leadership had not made "mistakes"? Is China also mirroring Russia's weaknesses?

The weakness of the Soviet Union

It is true that China is not only threatening the United States but also telling Russia that its leadership is weak. Because the Soviet Union collapsed under the supervision of former leaders.

The credit for bringing about the economic revolution in China after Mao Zedong goes to Deng Xiaoping. The Soviet Union did not have a leader like Deng Xiaoping.

It was only after Deng's economic reforms that China became one of the world's largest economies. On the other hand, the Soviet Union could not do that. China's policy was clear. The axis of power here is the state and there is no compromise. However, there will also be competition and transparency in terms of economic and technological advancement.

The Soviet Union has not only failed to strengthen itself economically, but also at the political level

When Deng Xiaoping began economic reforms in 1978, China's share of the global economy was only 1.8 percent, rising to 18.2 percent in 2017.

China is now not only an emerging economy but also struggling to regain its lost ground. That is, when in the 15th and 16th centuries its share in the world economy was close to 30%.

The three leaders who are generally considered to have played a significant role in making China powerful include Mao Zedong, Deng Xiaoping and current leader Xi Jinping.

43 years after Deng Xiaoping's economic revolution, it would not be wrong to say that China is once again moving forward under the leadership of a strong leader like Xi Jinping.

China is threatening the United States in the name of the Soviet Union, but its ambassador's statement is tantamount to sprinkling salt on Putin's wounds.

Putin calls the break-up of the Soviet Union a tragedy, and when China uses his example to make statements that we are not the Soviet Union, the Russians will obviously feel uneasy. The anti-Soviet rhetoric the Chinese ambassador is talking about is correct. This would not have happened if the leaders of the Soviet Union had changed themselves economically and technologically.

By removing monuments to the Tiananmen Square massacre from Hong Kong universities, China has sent a message that it will deal with the Taiwan conflict vigorously and its central political system cannot be shaken

On March 29 this year, Brett Stephens, a former editor of the Jerusalem Post and a well-known Pulitzer Prize-winning columnist, wrote a column in the New York Times entitled 'How Can We Win the Second Cold War?'

"In the First Cold War, the United States and our allies had secret weapons against the Soviet Union and its satellites," Stephens wrote at the beginning of the article. The weapon was not developed by the CIA, nor did it come from DARPA or any lab. That weapon was communism."

Stephens wrote: "The West benefited from Russian communism because the system could not cope with the free market. Soviet policies were failing. "They pretend to give us money and we work," he was quoted as saying in the Soviet Union. This policy shattered the Soviet Union, which was armed with thousands of nuclear weapons.

"We are now heading for another Cold War," he added. This time China is in front of us. Both countries are clearly saying that not only their interests but also their values ​​are colliding. The United States has said China is challenging the rule of law, while China says the United States should refrain from imposing its democracy on the world.

China has already destroyed communism, which Stephens called the Soviet Union's secret weapon in the Cold War. In addition, China is creating difficulties for the United States in the free market system and the United States fears that it will be left behind.

Both sides say they do not want a Cold War, but US President Joe Biden recently said no delegations would attend the Winter Olympics in Beijing.

The United States has blamed human rights abuses in China and Australia, Britain, Canada and Japan for backing the boycott of the Beijing Winter Olympics.

China has also said that the security agreement between the United States, Britain and Australia is tantamount to strengthening the Cold War.

"The United States is trying to disrupt the global supply chain by blacklisting Chinese companies," the Chinese ambassador said.

He also defended the friendship between China and Russia. He said both countries were facing unfair treatment.

The Chinese ambassador said the United States wanted trilateral talks with Russia and China on nuclear weapons control, but that China would hardly participate in those talks.

What was the Cold War?

In 1961, the Soviet Union realized that the United States would invade Cuba and that Fidel Castro's government would be overthrown. Thus, in 1962, Soviet leader Nikita Khrushchev had nuclear missiles installed in Cuba. After the installation of these missiles, the United States came under attack from Russia.

The Cold War then continued in the form of various confrontations, conflicts and animosities between the Soviet Union and its allies with the United States and its allies.

The Cold War began after the end of World War II. The whole world was divided into two camps. One camp was headed by the Soviet Union and the other by the United States.

But by 1991, the Soviet Union had disintegrated and the United States had emerged as the world's sole superpower.

Now China is challenging US supremacy and calling it the beginning of the Second Cold War. Russian leaders have not yet been able to recover from the effects of the collapse of the Soviet Union.

Last month, Russian President Vladimir Putin said that three decades after the collapse of the Soviet Union, the tragedy is still alive in the hearts of the Russian people.