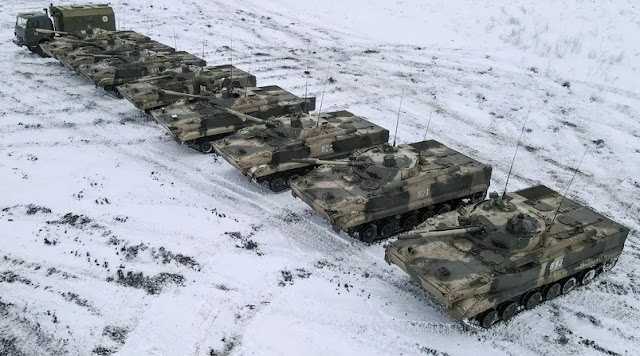 The US President speaks of the "strong possibility" of a Russian invasion. The number of soldiers on the Ukrainian border continues to increase.

US President Joe Biden has warned his Ukrainian counterpart Volodymyr Zelenskyy that Russia may be planning an invasion in February. Biden made it clear to Selenskyj in a phone call that there was a "strong possibility" of such an invasion, said National Security Council spokeswoman Emily Horne in the White House.

In the conversation, Biden again assured Selenskyj of his support in the event of a Russian invasion. According to the White House, he reiterated the US' readiness to "react decisively, together with its allies and partners, if Russia invades Ukraine further." The government in Washington is therefore examining "additional macroeconomic support to help the Ukrainian economy under the pressure of Russian military build-up".

The strength of Russian troops on the Ukrainian border continued to increase, according to the US government. "As for Russian build-ups, we're seeing - also in the past 24 hours - another accumulation of (...) combat troops deployed by the Russians in the western part of their country and in Belarus," Pentagon spokesman John Kirby said. However, Kirby did not name the number of armed forces that had recently been added. The rearmament wasn't "dramatic", but it wasn't frozen either.

Kirby announced further military aid to Ukraine . The next deliveries should therefore soon arrive on site. "We will not detail all items included in these shipments," he said. With a view to the deployment on the Ukrainian border, they want to be careful with this information. "We are in constant communication with Ukraine about their needs and capabilities."

The US also wants to discuss the conflict in the UN Security Council. The US government asked the panel to consider the crisis in a public session Monday because of Russia 's "clear threat to international peace and security ," said US Ambassador to the United Nations Linda Thomas- Greenfield, with.

The NATO states and numerous other countries have been criticizing the troop deployment on the border with Ukraine for weeks. Secret service agents fear a Russian invasion of the neighboring country. However, it is also considered conceivable that the deployment is primarily intended to be a means of exerting pressure to get the NATO states to accept Russian demands for new security agreements, such as a guarantee that Ukraine will not be admitted to NATO and the withdrawal of all US Troops from Eastern European NATO countries.

When the United States officially rejected the demands, Russian Foreign Minister Sergey Lavrov said: "There is no positive answer to the main question." However, a letter sent by the US government gives hope "for the beginning of a serious discussion on secondary issues".

Denial of Nord Stream 2 in the event of an escalation

In the event of an escalation, the NATO states have repeatedly threatened tough sanctions against Russia in recent weeks. For example, according to State Secretary Victoria Nuland, the United States sees no future for the Nord Stream 2 Baltic Sea gas pipeline if Russian troops invade Ukraine. The pipeline will then "not go into operation," said Nuland, referring to corresponding statements by the federal government.

EU Commission President Ursula von der Leyen also referred to the pipeline . "Nothing is off the table," she told CNN about possible sanctions. They are working on a diplomatic solution, but are prepared for an escalation. With a share of 40 percent in world trade, the EU is Russia's largest trading partner and most important foreign investor. "These figures show that we have a strong leverage and that it would be very painful for Russia if the aggression against Ukraine escalated," von der Leyen said.

Other possible sanctions, in addition to not allowing Nord Stream 2, include a possible exclusion of Russia from the Swift international payment system, which would block a large part of Russia's foreign trade. However , this could also affect the European economy. In addition, the Western partners fear that such a step could provoke the emergence of an alternative payment system, possibly with China's cooperation.

NATO has already responded to the troop deployment by increasing its troop presence in Eastern Europe. On Monday, the alliance announced that it would move additional combat aircraft and naval vessels to the Baltic Sea. Biden also announced that he would move several thousand US soldiers to the region.