Ukraine Conflict: Helpless Between The Powers 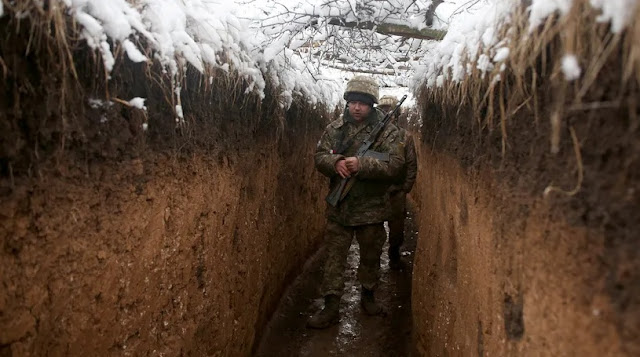 In Geneva, the US is negotiating with Russia and the Europeans are only being consulted on the sidelines. If they don't defend their interests more robustly, they will be ground up.

In the coming week, the future of the European security order will be the focus of international politics. Russian and US diplomats meet in Geneva on Monday; the NATO is planning a meeting of the NATO-Russia Council for Wednesday; the day after, a meeting of the Organization for Security and Co-operation in Europe follows.

These three meetings will deal with Russian demands for a revision of the European security architecture, as it has existed since the end of the East-West conflict.

To this end, in December Russia submitted specific treaty proposals for a security agreement with the USA and NATO: The Biden government and the other NATO members should undertake not to accept Ukraine or any other former Soviet republics as members. The alliance should also bring its military infrastructure in Eastern Europe back to 1997, the year the NATO-Russia Founding Act was signed.

If these proposals were implemented, not only would a security policy buffer zone with a status of reduced security arise in the eastern part of the alliance area. It meant the basis for a return to a European state order in which great powers could claim exclusive zones of influence with reference to historical claims and perceived threats.

The European history of the 20th century offers rich illustrative material for the fatal, destabilizing consequences of such a great power politics disregarding the wishes of the countries concerned.

Claims that the existing peace order for Europe is obsolete do not stand up to serious scrutiny: the Paris Charter of November 1990 (also with the approval of the then still existing Soviet Union) still guarantees the territorial integrity of all participating states and confirms the commitment to renounce violence and declares "equal security" for all to be the basic principle of security in Europe.

Numerous agreements on confidence building, disarmament and arms control have become an expression of this consensus. In this sense, elements of the Russian proposals to revert to military transparency regulations or to specific regional agreements on the non-stationing of certain weapon systems offer interesting starting points.

Most of the Russian proposals, however, reflect a renaissance of geopolitically motivated great power thinking. What Europe should be particularly concerned about:

The Biden government is promoting this break in the epoch, at least in formal terms, because the USA and Russia are discussing the contours of a European security order on the main stage in Geneva without the participation of Europeans.

There is little consolation that the Biden government has successfully endeavored to multilateralise the American-Russian dialogue through meetings of NATO and the OSCE. It is obvious that these talks have only symbolic meaning, and that they will not generate genuine European impulses is not to be expected.

One of the few European politicians who has recognized this deficit and has publicly called for a stronger European role has been the EU foreign policy representative Josep Borrell. But when it comes to security policy, the weight of the EU is too weak to be heard.

The European NATO members are also staying depressingly quiet despite their repeated assurances that the European pillar of NATO is to be strengthened as a political forum for consultation. The conclusions at the end of the Trump era seem to have been forgotten, according to which Europe cannot simply rely on the leadership of the USA and must therefore stand up for its security interests more intensely, more comprehensively and more independently than before.

In view of the many voices of the European states and their different interests, this is not an easy task - but without appropriate coordination of foreign policy positions there is a risk of further marginalization of security policy in Europe.

Russian foreign policy these days is hardly surprising: President Putin sees himself as the leader of a world power on a par with President Biden; the states of Europe play no role in his great power plans, he is dividing them.

This applies not only to the European Union, but equally to NATO. He has already discussed Russia's demands for an end to NATO's Easter expansion with his Turkish counterpart Erdoğan. The aim of this conversation was probably to pull Turkey on the side of Russia and to make a consensus in NATO more difficult.

On the other hand, one learns new things about the foreign policy of the Biden government: the approval of the talks to the exclusion of the Europeans was a concession to Russia that unintentionally lent the Russian concerns political weight and legitimation. This should deeply worry those NATO allies who have for some time (and not wrongly) feared being abandoned by the US in favor of other priorities.

Because Geneva is sending out a fatal message: the USA and Russia are negotiating the cornerstones of the future European security architecture with one another; the Europeans are only marginally consulted by the USA. This is reminiscent of the structure of the transatlantic security relationship during the East-West conflict and contradicts Biden's announcement at the beginning of his term of office that he would rely on multilateralism.

If the Europeans want to be perceived as a geopolitical power and not become the plaything of rival great powers, they have to represent their interests more robustly. A loud voice from the European pillar of NATO would be a start.