UAE: Drone Strike Must Be Punished 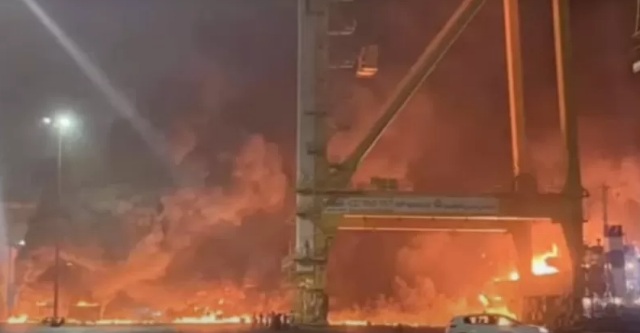 The UAE Foreign Ministry has condemned the drone strike by Houthi rebels in a statement and said "it will be punished." "The United Arab Emirates has the right to retaliate against this terrorist attack," the statement said, according to Reuters.

One Pakistani and two Indian nationals were killed in explosions in three oil tankers in the port area of ​​the United Arab Emirates on Monday, according to Abu Dhabi police.

According to the Emirati news agency WAM, Abu Dhabi police said after the attack that in addition to the casualties, six people were injured in the fire that broke out after the blast.

The bombings are said to be the result of drone strikes, while Yemen's Houthi rebels have said they will soon release details of a "military operation" in the UAE. According to the news agency Reuters, the police said that on Monday, three oil tankers exploded in the area of ​​Musafah Iked 3 near Abu Dhabi port which caused a fire.

A statement from Abu Dhabi's police said, "Preliminary investigations indicate that three objects, such as drones, apparently fell in two different areas and may have caused an explosion and a fire." Authorities say the incident is under investigation and details will be released in the investigation report.

The fire broke out near the oil reserves of the state oil company Abu Dhabi National Oil Company (ADNOC). In addition to the Abu Dhabi port, fires have also been reported from the airport area.

According to International Media Monitoring, following reports of oil tankers exploding in Abu Dhabi, Houthi rebels have announced that they will soon release details of the attacks aimed at targeting the UAE. Houthi rebel military spokesman Yahya Sarai said in a tweet that "the (rebel) armed forces have said they will provide details of major military operations in the UAE in the next few hours."

The Houthi rebels have also said that these operations will be key in the last seven years of war. The United Arab Emirates is thought to be part of a Saudi-led military coalition fighting Houthi rebels in Yemen.

On January 10, Yemeni forces backed by the United Arab Emirates announced the capture of the oil-rich province of Shibwa from the Houthis.