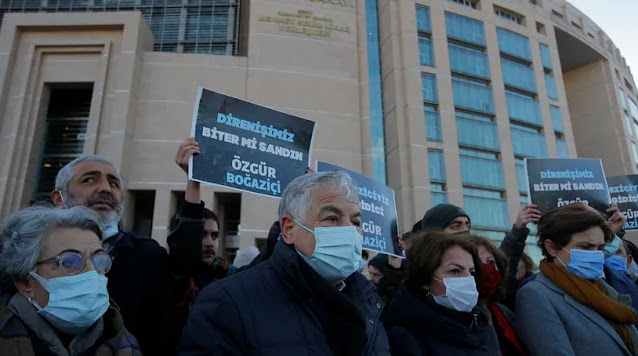 As a member of the Council of Europe, Turkey would have to implement its request to release Osman Kavala. But the government refuses. What's next?

Despite the threat of sanctions by the Council of Europe, Turkey does not want to release the imprisoned cultural promoter Osman Kavala from prison. A Council of Europe spokesman said the country stuck to this stance until a response deadline expired on Wednesday.

The Council of Europe in Strasbourg recently initiated infringement proceedings against its member country Turkey in a historically almost unique step. Ankara was asked to provide feedback on this by Wednesday at midnight.

This statement had been received, but its exact content was secret. It is completely open whether sanctions will actually follow or whether Turkey will even be excluded from the Council of Europe. This would initially require several intermediate steps.

The background to the proceedings against Turkey is the constant refusal of the government in Ankara to release Kavala from prison. The European Court of Human Rights (ECtHR) ordered the human rights activist's release around two years ago and classified his detention as politically motivated.

Further sanctions are a matter of negotiation

Kavala has been imprisoned for four years without ever being convicted. In a trial in Istanbul, the 64-year-old is accused of an attempted coup in connection with the Gezi protests and "political and military espionage" in connection with the 2016 coup attempt. Kavala strictly rejects the allegations. In the last hearing before the deadline, the Turkish court again refused Kavala's release.

Now, at the beginning of February, the so-called Committee of Ministers of the Council of Europe with representatives of the member states has to decide whether the matter will be submitted to the ECtHR again.

Should the court then find that its Kavala judgment has not been implemented, the Committee of Ministers would have to decide on further steps or sanctions. However, it is not specified which steps these would be.