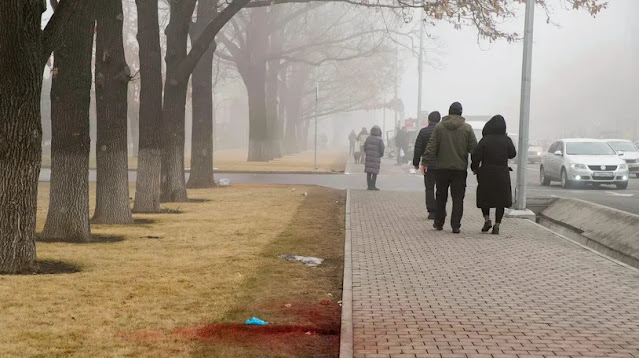 According to President Kassym-Shomart Tokayev, the constitutional order in Kazakhstan has been restored. The government confirms civilian deaths for the first time.

According to the Interior Ministry, 26 demonstrators were killed during the protests against the government in Kazakhstan.

In addition, there were more than 3,000 arrests, reported the state broadcaster Khabar 24, citing the ministry. The authority therefore spoke of "armed criminals". Another 18 demonstrators were injured.

State television had already spoken of dozens of "eliminated" people in the metropolis of Almaty on Thursday. That already suggested civilian deaths. The authorities had initially only confirmed the deaths of 18 security forces.

The Kazakh leadership stated that they were once again in control of the situation in the country. The constitutional order was "largely restored in all regions," said President Kassym-Jomart Tokayev.

According to Khabar 24, the president said that the anti-terrorism operations he called them should continue until the "fighters are completely wiped out". In Almaty in the south-east of the country, where the riots were particularly violent, armed demonstrators are said to have holed up in the building of a television station.

Energy prices as a trigger

In Kazakhstan there have been unprecedented protests against the country's authoritarian leadership for days. The unrest in the ex-Soviet republic, which is rich in oil and gas, was triggered by displeasure at the rise in fuel prices at petrol stations. The demonstrations quickly turned into partly violent protests against the government, corruption and abuse of power.

Kazakhstan was ruled for decades by the authoritarian ruler Nursultan Nazarbayev, who retained great influence even after his resignation in 2019.

In response to the protests, the current President Tokayev dismissed the entire government and imposed a nationwide state of emergency.

On Wednesday evening, Tokayev asked the regional military alliance Organization of the Collective Security Treaty (CSTO) for help. Russia then sent paratroopers to Kazakhstan. In addition to Russia and Kazakhstan, four other former Soviet republics are members of the military alliance. The alliance did not provide any information on the number of soldiers sent.

The Federal Foreign Office calls for dialogue and a peaceful solution

Western states again expressed concern about the situation in Kazakhstan. The Foreign Office reported that they were exchanging ideas with the closest local partners about the development. The task now is to find a peaceful solution "within the framework of a comprehensive dialogue with all those involved".

The violence, but also the massive restrictions on access to the Internet and social media, are viewed with concern. Kazakhstan's obligations under the OSCE to uphold fundamental freedoms also included maintaining free access to information, freedom of the press and freedom of assembly.

The organization Reporters Without Borders complained about police violence against media representatives. In addition, the Internet was repeatedly blocked in the ex-Soviet republic with its 18 million inhabitants. "That makes it difficult to provide independent information about what is going on."

The USA also spoke out again for a peaceful solution to the crisis. US Secretary of State Antony Blinken telephoned his Kazakh colleague Muchtar Tleuberdi.

Blinken reiterated "the United States' full support for the constitutional institutions of Kazakhstan and the freedom of the media," said the State Department in Washington. There were also warnings from the EU that the violence must come to an end.