Omicron In China: Communists In The Success Trap 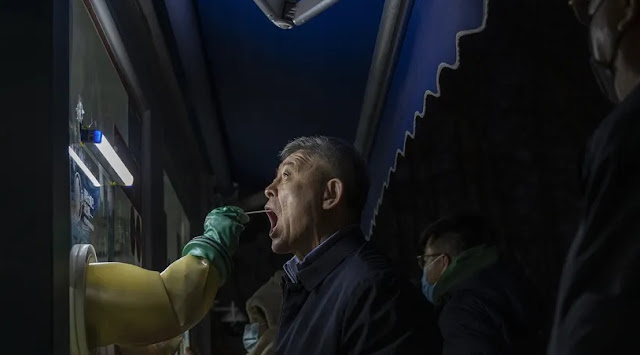 China's strict corona measures worked, the economy grew during the pandemic. Now Omicron has reached the country and many fear the consequences.

And if so, it went on to say, packages and envelopes should be opened outdoors if possible and the recipients should definitely wear masks and gloves. In short: There is a warning about postal items as a potential way of spreading the coronavirus.

Various local health authorities had previously whispered in press releases that the first Omicron case registered in the capital, Beijing, may have come via a package from Canada, the United States and Hong Kong. The person is said to have infected two other people, and a case with the Delta variant was also reported in the capital. From a scientific point of view, such transmission routes are considered implausible.

Authorities had previously spread a thesis that corona was passed on through imported frozen goods, which the WHO considers unlikely. Beijing's propaganda apparatus is also constantly trying to distract from the first superspreader event in Wuhan in late 2019 and spread outlandish claims of foreign origin.

But the new Post rumor also points to how alert the Communist Party (KP) is about the Omicron variant. On Tuesday, China's authorities reported 127 new local omicron cases in the country with confirmed symptoms, on Thursday there were said to be 46. These are numbers that seem like a joke from a European perspective - but the Delta variant and now Omicron are challenging Beijing's globally unique Zero Covid strategy, which has so far successfully controlled the virus with its gigantic test infrastructures and strict lockdowns.

The leadership celebrates for Zero Covid

After China's economy and mobility shut down for six weeks in the spring of 2020 following the Wuhan outbreak, China's companies quickly recovered, thanks largely to strong demand from the rest of the world. In 2020, the gross domestic product grew by 2.3 percent, while in 2021 it had already grown to 8.1 percent.

At the same time, the zero-Covid strategy is popular in China, where people are "proud that the country has got the virus under control, especially as the United States is struggling with it," like the health and China authorities expert Yanzhong Huang of the Council of Foreign Relations recently pointed out. The ruling CP celebrates this achievement and makes the state media look down on the pandemic in the rest of the world, especially the US.

The price for this: The borders are still practically tight today - those entering the country have to accept strict controls, long quarantine periods and tedious test procedures - and will remain so for the time being, at least until the important 20th Party Congress of the CPC, where its chairman Xi Jinping made a big splash want to celebrate.

Since the end of 2021, there have also been repeated outbreaks of the delta variant in Chinese economic metropolises, with the city of Xi'an alone being cordoned off for three weeks. International flights have also been canceled because of this. There were also outbreaks in important container ports, such as most recently in Ningbo-Zhoushan near Shanghai, where areas of the port were closed, or last summer in southern China, for example, when terminals at the gigantic container port of Yantian near the technology city of Shenzhen were closed due to Corona and ships were backed up.

The terminals and many companies are part of global production and logistics. Because there are always cases of corona, Beijing is now talking about a "dynamic zero" strategy: infections can no longer be completely prevented, but the focus of infection is to be eradicated as quickly as possible.

The success of Zero Covid has kept the supply chains of the global economy running, but with the emergence of Delta and Omicron in China, international companies are increasingly concerned about temporary but recurring city and business closures.

Volkswagen, for example, had to close a plant in Tianjin (near Beijing) operated with its Chinese partner FAW for a good week because of an Omicron case before it was now restarted. Sales by the Volkswagen Group in China fell by 14.1 percent in 2021 anyway . That would have been due to the lack of semiconductors and the problems with supply chains caused by the pandemic, according to VW. And: curfews or production stops often come overnight, meaning that supply chains have to be adjusted.

What happened to VW and others can theoretically always happen again. "Regional lockdowns like in spring 2020, which also affect companies, will be a new form of reality," says Max J. Zenglein, chief economist at the China think tank Merics in Berlin. But there is a crucial difference to 2020: One has been able to adapt to this development, affected companies can try to minimize potential damage today: "China's regional lockdowns should no longer surprise anyone."

It is also known that China's population is theoretically poorly equipped against Omicron. By successfully keeping the original virus type away from Wuhan, there are inevitably no immunization effects in the Chinese population. Although more than 80 percent of the Chinese are vaccinated, according to a study by the University of Hong Kong, a refresher with the in- house development Sinovac, which is particularly frequently vaccinated in the People's Republic, has little effect against the omicron variant .

More pressure from the Olympics and the party congress

Boosters with mRNA substances from BioNTech and Moderna, which provide protection against the most serious diseases, were not allowed to assert themselves for political reasons, although BioNTtech entered into a joint venture with a pharmaceutical company in Shanghai. The KP leadership probably does not want to pay attention to other countries in the fight against the pandemic - they are now legitimizing themselves too much with their national corona strategy.

Now the authorities fear not only packages, but also visitors from abroad who will arrive in Beijing with the Olympic Games. The first support teams are already arriving. The Olympics are to take place within a dense bubble, which is now also supposed to withstand Omicron, which seems unlikely given the infectivity of the virus variant. "Perhaps the Chinese leadership regrets having been awarded the Olympics because they now have to bring the world into their country, which they would never have done otherwise," says Zenglein.

With the Olympic Games and the party congress in autumn, the pressure on the CP to control Omicron with Zero Covid also increased immensely. For the time being, this also means the closure of international flights, port terminals or companies. However, Zenglein is not quite so pessimistic about the economic effects: "You have to take a closer look: If you take the six-week lockdown in 2020 as a benchmark and look at China's record-breaking export figures for months, you ask yourself where - at least so far - the real one is damage lies."

However: In the rest of the world, Sars-CoV-2 with omicron now seems to be slowly becoming endemic. It therefore remains unclear how the CP wants to deal with it. Or rather: how long China's borders should remain closed.