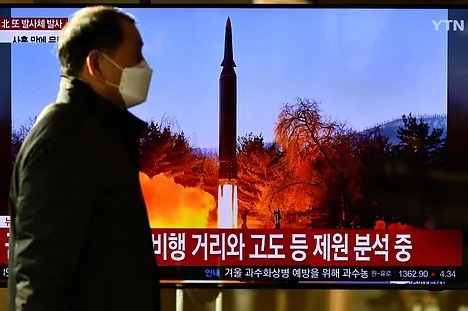 It is the third test of the Kim Jong-un regime in the last nine days.

The South Korean Joint Chiefs of Staff (JCS) reported today that it detected the launch by North Korea of an "unidentified projectile in an easterly direction", which is the third Pyongyang test in the last nine days.

The brief statement from the South Korean Army did not provide more information about the projectile, while the Japanese government has pointed out that it could be a ballistic missile.

On January 5 and 11, the North Korean regime fired what it claims are hypersonic missiles, although Seoul and Tokyo have insisted in their analyzes that they are ballistic missiles that show great maneuverability.

Today's North Korean essay comes hours after Pyongyang threatened to respond in a "stronger and more determined" way to the new sanctions that the US approved this week against North Korean citizens whom it accuses of providing materials and technology for the program from abroad. weapons of the regime.

US Ambassador to the UN Linda Thomas-Greenfield also said this week that Washington is pushing for the Security Council to impose additional sanctions on North Korea as punishment for all the launches it has carried out since last September.

Washington estimates that North Korea used ballistic missiles in these tests, which violates previous sanctioning resolutions approved since 2006 as punishment for the North Korean weapons program.

In a message broadcast on the New Year, North Korean leader Kim Jong-un avoided sending a message to the US and assured that the regime's priority is the national economy and the strengthening of national defense.

Kim himself last year rejected US offers to try to resume talks on denuclearization, stalled since 2019.