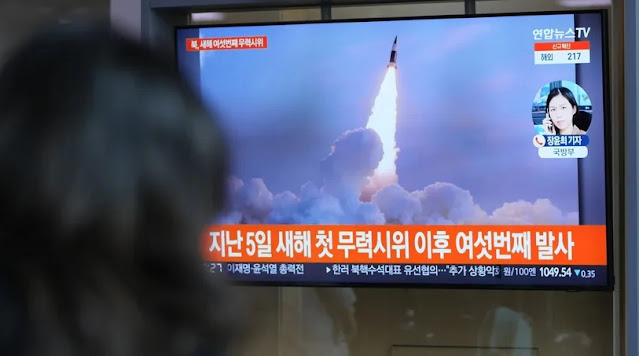 South Korea reports that North Korea has again fired two missiles towards the sea. It would be the sixth weapon test this month.

The rockets were launched five minutes apart and flew about 190 kilometers at an altitude of 20 kilometers before crashing into the Sea of ​​Japan. It was the sixth such weapons test by North Korea this month.

Senior South Korean security and military officials convened for an emergency National Security Council meeting. The government in Pyongyang was asked to resume dialogue, the presidential office in Seoul announced. Japanese Prime Minister Fumio Kishida called the repeated rocket launches extremely regrettable. So far, however, there have been no reports of damage to ships or aircraft off the Japanese coast.

The North Korean government indicated last week that it would also resume testing of nuclear weapons and long-range ICBMs that could reach the United States. North Korean ruler Kim Jong Un suspended the tests in 2018 during a phase of diplomatic contacts with then US President Donald Trump.

Talks with the US falter

Kim had already said at the end of 2019 that North Korea was no longer bound by its self-imposed test moratorium. The background was the lack of progress in the negotiations with the USA on the nuclear program. According to analysts, North Korea now wants to put pressure on US President Joe Biden with the increased missile tests. He had offered talks, but refused to ease sanctions without disarmament steps in North Korea.

According to experts, the country wants to demonstrate military strength in addition to further developing its rocket technology. The UN Security Council has imposed tough sanctions on him for his nuclear weapons program. These prohibit testing of ballistic missiles.

These are usually surface-to-surface missiles that, depending on the design, can also carry a nuclear warhead. Recently, hypersonic missiles have also been tested. These fly five times faster than sound, are very maneuverable and therefore difficult to intercept.