More than 70 dead in IS attacks in Syria and Iraq 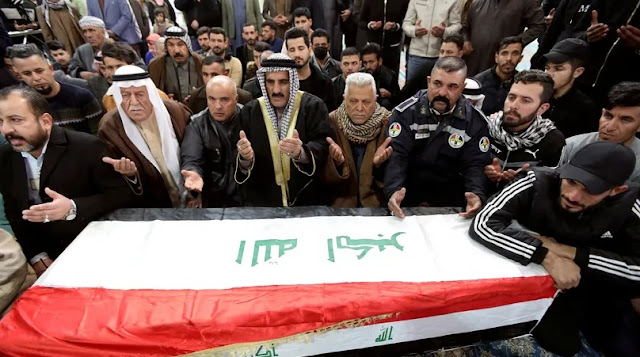 Islamic State fighters have attacked a Syrian prison where ISIS supporters are being held. Eleven soldiers were killed in a raid in Iraq.

The Islamist militia Islamic State (IS) has killed more than 70 people in attacks in Syria and Iraq. In north-eastern Syria, militants have attacked a prison in the city of Al-Hassaka where at least 3,500 suspected ISIS members are being held there.

More than 20 Kurdish security forces and nearly 40 IS members were killed, the Syrian Observatory for Human Rights said. Eleven soldiers were killed in a raid on a military base in eastern Iraq, local authorities said.

The fighters reported on both attacks via Amaq, the IS news channel. The aim of storming the prison in Hassakeh was "to free the prisoners," the extremists said. At least 23 Kurdish security forces and 39 IS fighters were killed in the fighting, according to the UK-based Observatory for Human Rights. Some prisoners escaped.

The more than 100 extremists began their attack on the prison on Thursday evening with heavy machine guns and explosive devices, said Farhad Schami, a spokesman for the Kurdish-majority Syrian Democratic Forces (SDF). Leading representatives of the IS are also in the prison.

According to the SDF, the organization arrested 104 prisoners shortly after they escaped. After an attempt to escape during the night, there was a "second mass escape attempt by IS fighters" from prison. The attacks continued on Friday.

At least five civilians were killed in the fighting - among other things because they were used by IS fighters as human shields when they retreated to houses in the neighborhood. Some booby traps were laid there.

On Friday evening, SDF commander Maslum Abadi said his troops, with the help of the US-led coalition, managed to repel the attack. He tweeted that all the fugitives had been arrested. According to the observatory, this is the largest attack of this type since the IS "caliphate" was crushed in 2019.

IS fighters also attacked the military base in the Iraqi province of Diyala about 60 kilometers northeast of the capital Baghdad on Friday night. Iraqi security sources said the IS fighters broke into the barracks at 3 a.m. after killing a security guard.

According to a statement by the Iraqi military, a lieutenant and ten soldiers were killed. Prime Minister Mustafa al-Kadhimi announced that the attack would not go unpunished. The Iraqi military has a duty to prevent such an act from happening again and to hunt down the terrorists.

In 2014, IS took control of large parts of Iraq and Syria. The Iraqi government was able to push back the group as far as possible in 2017. However, small groups of IS fighters remain active in rural areas. A UN report last year put the number of IS fighters still active in Iraq and Syria at a total of 10,000.