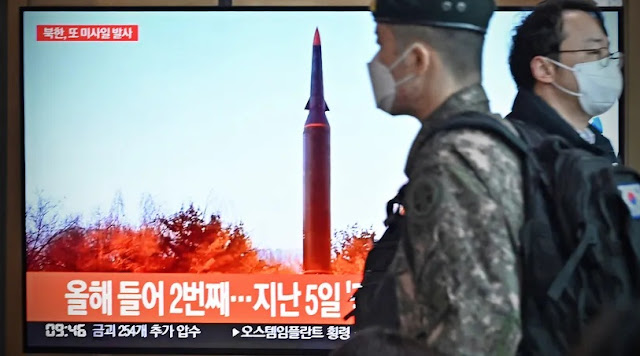 North Korea has again fired a projectile into the sea east of the Korean peninsula. Japan and South Korea speak of a suspected ballistic missile.

For the second time in a week, North Korea has apparently tested a ballistic missile. As the neighboring countries South Korea and Japan reported, North Korea fired a rocket in the interior towards the open sea.

According to the General Staff of the South Korean military, it may have been a ballistic missile. Japanese government officials also spoke of a suspected ballistic missile, according to a report by the Kyodo news agency. The rocket fell outside Japan's "exclusive economic zone" into the Sea of ​​Japan (Korean: East Sea).

North Korea had already fired a ballistic missile on January 5 and spoke of a successful test of a hypersonic missile the next day.

The South Korean Ministry of Defense doubted that the missile flew 700 kilometers, as North Korea stated. Compared to the rocket launch in September, the test does not represent a technological advance, the ministry said. Missiles of this type can reach more than five times the speed of sound and are maneuverable in flight.

So they are difficult to spot for conventional air defense. Like ballistic missiles, hypersonic missiles can potentially carry a nuclear weapon.

North Korea's ruler Kim Jong-un had announced that he would continue to develop the military capabilities of his armed forces.

The country had declared itself a nuclear power. The North Korean leadership is already subject to numerous international sanctions because of its nuclear and missile programs. Negotiations with the USA on nuclear disarmament and talks on a peace process with South Korea have come to a standstill.

Before the most recent missile test, Japan and five members of the UN Security Council, namely the USA, France, Great Britain, Ireland and Albania, called on North Korea "to refrain from further destabilizing acts".

In view of its nuclear weapons program, they called on the North Korean leadership to "enter into meaningful dialogue with a view to our common goal of complete denuclearization".