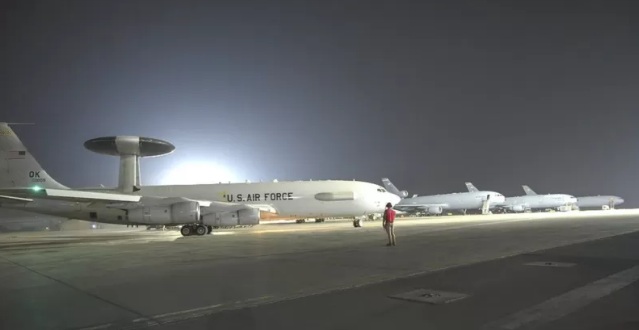 The United Arab Emirates and U.S. officials say a missile strike by Houthi rebels on Monday struck the Al-Zafra military base in the state capital, Abu Dhabi, where about 2,000 U.S. troops are stationed. In addition to the UAE military operation, US-made Patriot missiles were also used to intercept.

Capt. Bill Urban, a spokesman for the U.S. Central Command, said in a statement that U.S. forces fired several Patriot missiles in response to two missiles fired at al-Zafra military base, as well as UAE forces.

No one was killed in the Houthi rebel attack on Monday, according to US and Emirati officials.

The Houthi rebels fired missiles at the United Arab Emirates on Monday morning, after which the UAE Ministry of Defense first announced in a statement that it had destroyed the missiles and then claimed in a Twitter message. The bomber struck shortly after noon in front of a rally in the Yemeni province of Al-Jawaf.

According to the Ministry of Defense, an F-16 fighter jet took part in the retaliation. The ministry has also released footage of the attack. The UAE is part of a Saudi-led military coalition fighting Houthi rebels, and this is the second time in a few days that Houthi rebels have tried to target the UAE.

The latest missiles were aimed at the state of Abu Dhabi, where three people, including a Pakistani , were killed in a January 17 drone strike on the port. Following the attack, a spokesman for the Houthi rebels warned that more attacks on the UAE were possible in the future.

The attack, for the second week in a row, has exacerbated tensions in the region, where a Saudi-led military coalition has been fighting Houthi rebels in Yemen for years. The UAE is part of this military alliance, but in the past Iranian-backed Houthi rebels have only attempted attacks on Saudi Arabia, and rarely any kind of attack on the UAE, including in the Middle East. Occurs in the most peaceful and secure states.

A military spokesman for the Houthi rebels said in a statement that they had fired "Zulfiqar" ballistic missiles as well as a drone at Dubai, but Emirati officials did not confirm or deny the claim. ۔ "We advise foreign companies and investors operating in the UAE to leave because it is now unsafe." It should be noted that according to the United Nations, as a result of the seven-year war, more than 1.5 million people have been killed in Yemen and millions have been forced to flee.

On the other hand, the US State Department reiterated its support for its Saudi and Emirati allies and said that they are working to strengthen their defenses. However, department spokesman Ned Price was asked if US President Joe Biden would accept a request from the United Arab Emirates to reintroduce Houthi rebels to the US-listed list of terrorist groups. There was no response. It may be recalled that last week the US President had said that he was considering this request.

One of the poorest countries in the world, Yemen shares most of its border with Saudi Arabia, and its capital, Sanaa, is about 1,500 kilometers from the United Arab Emirates state of Abu Dhabi. One Sudanese and another Bengali were wounded in a missile attack by Houthi rebels in southern Saudi Arabia last Sunday night.

A spokesman for the Houthi rebels claimed responsibility for the latest attacks in both countries, but did not provide further details, according to Reuters. It should be noted that the Saudi-led military alliance has been fighting Houthi rebels in Yemen for the past six years.

Recent Houthi attacks on Saudi Arabia and the UAE

According to a statement from the UAE Ministry of Defense, fragments of the destroyed missiles landed in Abu Dhabi but caused no casualties. However, the attack disrupted traffic at Abu Dhabi International Airport.

On the other hand, the Saudi news agency SPA says that some workshops and civilian vehicles were damaged in Sunday night's attack in southwestern Saudi Arabia. The United Nations has also expressed concern over the recent tensions and called on both sides to exercise restraint. A spokesman for the Houthi rebels told the TV channel that the Houthis had said they would provide details of the "military operation" carried out in the United Arab Emirates and Saudi Arabia on Monday.

Following last week's attack on the UAE, the Saudi coalition carried out several airstrikes on rebel strongholds in the Yemeni capital, Sanaa, with reports of casualties. The Saudi coalition has been fighting Houthi rebels in Yemen since 2015. In the wake of the Houthi attacks on the United Arab Emirates and Saudi cities, the coalition has stepped up airstrikes and operations on Houthi targets. At least 60 people were killed in an airstrike on a temporary detention center in northern Sanaa on Friday, while an ongoing operation killed 20 people in a Houthi-held city.

The Saudi coalition intervened in Yemen in March 2015 when the Houthis ousted the internationally backed government in Sanaa. Since then, Houthi rebels say they are fighting a corrupt regime and foreign intervention.