Kazakhstan: Step Out Of The Shadows 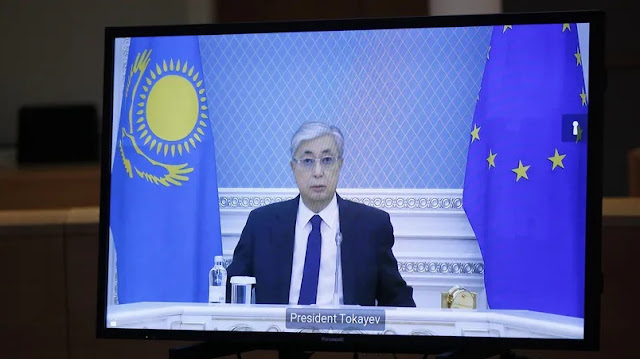 Kassym-Schomart Tokayev was long considered the puppet of the old Kazakh dictator Nursultan Nazarbayev. Has the president used the crisis to consolidate his power?

They were images of brute force that went around the world: burned-out cars, charred facades, shots and deaths. Scenes like from a war. But as quickly as the Kazakh crisis came , it seems to have ended again as quickly. At least this is the impression that Kazakh President Kassym-Schomart Tokayev wants to convey.

"The black days," Tokayev said in a speech to the House of Commons on Tuesday, "are over." Behind him the light blue flag of Kazakhstan with the yellow sun, in front of him the MPs, listening motionlessly.

Tokayev repeated the harsh rhetoric of the past few days, speaking of "bandits", "looters" and a "war of terror" that had been sparked against the country. But now the situation is under control again. The withdrawal of the Russian-led military alliance from Kazakhstan is slated to begin in two days. Tokayev also announced reforms, promised more transparency, new educational facilities and sports fields. And a dialogue with civil society.

Much is still uncertain in Kazakhstan these days. Were the peaceful mass protests sparked by high raw material prices at the beginning of the year really undermined by interest groups? Or even staged, a power struggle within the elite? And was the powerful former president Nursultan Nazarbayev, the "Elbasy", the "leader of the nation" - really overthrown? Or is he still pulling the strings in the background?

At the moment only one thing seems clear: Kassym-Shomart Tokayev, who until the end was considered a good loyalist to Nazarbayev, is now portraying himself as a strong man who has overcome this crisis. Who is the man who has officially ruled the country as president since 2019, but has only now been able to consolidate his power?

Son from a family of intellectuals

Tokayev differs in many ways from its predecessor, Nursultan Nazarbayev, the president who ruled Kazakhstan since its independence in 1991 and surprisingly resigned in 2019. Unlike Nazarbayev, who worked his way up from factory worker to general secretary of the Communist Party of the Kazakh Soviet Republic, Tokayev comes from a family of intellectuals. His father, Kemel Tokayev, was a famous writer, his mother a lecturer at the Almaty Pedagogical University.

Tokayev studied in the 1970s at Moscow's MGIMO, the cadre school for Soviet diplomats. After graduating, he was stationed in the Soviet embassies in Singapore and China, including in 1989, at the time of the Tiananmen massacre.

When Kazakhstan gained independence after the collapse of the Soviet Union in 1991, Tokayev returned to his homeland, where Nazarbayev made him Deputy Foreign Minister in 1993 and later (1999-2002) even Prime Minister.

From 2011 to 2013, Tokayev was Secretary of the United Nations in Geneva. He speaks five languages, including Chinese, and is considered a man of fine manners. "A well-educated, urban technocrat who lacks the credibility of the working class and the authority of his predecessor," said Kazakhstan expert Ben Godwin to the Financial Times.

Benno Zogg from the Center for Security Studies at ETH Zurich said that the loyal, colorless foreign politician seemed to be made for Nazarbayev's successor, for the smooth transfer of power, for two reasons: On the one hand, his good foreign policy contacts - Kazakhstan was always striving to maintain its international image also bought Western top politicians as advisors, including British ex-prime minister Tony Blair.

On the other hand, due to his foreign policy career, he also lacked a real power base in the country. "Tokayev started from a double position of weakness," says Zogg. "He could not count on fame or popularity, but as a handpicked successor he could not book an outsider bonus either."

So it is not surprising that Tokayev has so far hardly been able to set his own accents in the presidency. On the contrary:

How loyal the career diplomat was to Nazarbayev, the self-proclaimed "leader of the nation", Tokayev already proved with his first official act: He named the glittering capital Astana, which Nazarbayev had pounded out of the step with skyscrapers, futuristic landmarks and swanky palaces, after the first name of Nazarbayev to: Nursultan.

Then came January 2022. The mass protests against the increased raw material prices and the battle cries: "Scarf, ket!", "Old man, go away!" Last Wednesday, Tokayev finally dismissed the 81-year-old Nazarbayev as chairman of the National Security Council, a post that Tokayev himself now holds.

Further personnel decisions followed, for example the head of the domestic secret service Karim Massimov, a man of Nazarbayev, was fired and arrested. Rumors kept circulating that Nazarbayev had already fled the country, but there is no independent confirmation of this.

And now? At least outwardly, it looks as if Tokayev has stepped out of the shadow of his predecessor. However, he had to get help from another autocrat to quash the protests: Vladimir Putin.

The Russian president, who is clearly having trouble remembering the Kazakh president's first name, most recently on Monday at the online summit of the defense alliance CSTO, sent 3,000 soldiers to the former Soviet republic. Tokayev, a president not by Nazarbayev but by Putin's grace?

In the face of the crisis, the former diplomat was not very diplomatic; he ordered the security forces to shoot demonstrators without warning. Officially, at least 164 people are said to have been killed in the past few days and more than 2,200 were injured. A new face for the polyglot career diplomat with fine manners.

"That shows what unscrupulous decisions he is capable of," says political scientist Erica Marat from the College of International Security Affairs, who does not consider him particularly popular in the country anyway. A popularity that probably suffered even further due to the brutal approach and his rhetoric, she says: "I don't think he will be able to stay in power for long."

But has Tokayev really broken completely with his overpowering predecessor and his powerful clan that shaped the country for more than 30 years? Too much is still unclear. But that a power struggle is raging seems obvious. Tokayev at least used the events to remove old cadres, Zogg believes.

But he does not believe in a complete break with the old system: "It would be enormously disruptive, could lead to open elite struggles and would set a difficult precedent for Tokayev himself." At 68, he is no longer the youngest either. "At some point he will have to worry about his own successor."