Kazakhstan: Shots In The Kazakh City Of Almaty, Eight Police Officers Have Been Killed And 317 Injured 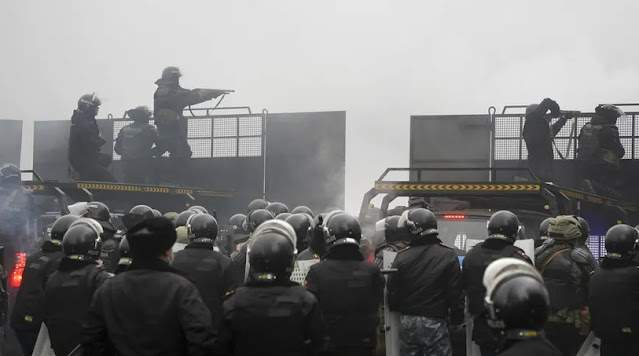 Rioting broke out again in the Kazakh metropolis of Almaty, and according to the media there were several dead. The US and EU called on the government to exercise moderation. So far, Eight police officers have been killed and 317 injured in riots in Kazakhstan.

In the Kazakh metropolis of Almaty, the protests continue for the third day in a row.

Police and protesters clashed again, according to several news outlets. Shots could be heard. The police told the Interfax news agency that several troublemakers had been "eliminated".

Kazakhstan is currently shaken by unprecedented unrest. Protests, which were initially directed against rising gas prices, expanded into mass protests critical of the government across the country within a few days.

In response to the protests, some of which were violent, President Kassym-Shomart Tokayev declared a state of emergency and dismissed the government before the military intervened in the metropolis of Almaty that night.

"Terrorist gangs" fought there with paratroopers, said Tokayev in a televised address. He blamed "domestic and foreign provocateurs" for the violence.

A military alliance led by Russia is now also to intervene. The troops were to be sent "for a limited time" to the former Soviet republic in order to "stabilize and normalize" the situation there, said Armenia's Prime Minister Nikol Pashinyan, who is currently chairman of the Russia-led Organization of the Collective Security Treaty (CSTO).

The Kazakh government said it had asked for this help after Kazakh troops used gun violence against demonstrators critical of the government.

In addition to Russia and Kazakhstan, Armenia, Belarus, Kyrgyzstan and Tajikistan also belong to the alliance of the announced "peacekeeping forces". The chairman of the Russian State Duma committee responsible for affairs of former Soviet republics, Leonid Kalashnikov, told the Russian news agency Interfax that Russia was obliged to help and that the military alliance had been established for this purpose.

The unrest is "not a threat, but an undermining of the integrity of the state," said Tokayev, justifying the decision to call in foreign troops. According to the authorities, several police officers and soldiers were killed during the protests.

However, there is a lack of independent reporting in the Central Asian country due to the lack of free media. Videos on social networks indicate that there are also a number of civilian deaths about which the authoritarian leadership of the country is silent.

It also remained unclear how many demonstrators were arrested. The information situation is made more difficult by repeated blockages of the Internet in the country.

The network was shut down for hours on Wednesday, and several television stations stopped operating. The websites of authorities, police and airports were again inaccessible during the night.

The EU and the USA call for a peaceful solution

The USA, the European Union and other countries called for a peaceful solution. "We ask all Kazakhs to respect and defend the constitutional institutions, human rights and freedom of the press, including restoring Internet access," said a spokesman for the US State Department.

The EU's External Action Service expressed concern about the serious unrest and called on the government to respect international obligations and the fundamental right to peaceful protest.

The Central Asian country with more than 18 million inhabitants was ruled for decades by the ruler Nursultan Nazarbayev and borders among others with Russia and China.

President  Tokayev has been in office since 2019. Kazakhstan is rich in oil, gas and uranium. In Reporters Without Borders' press freedom list, the state ranks 155th out of 180 countries.